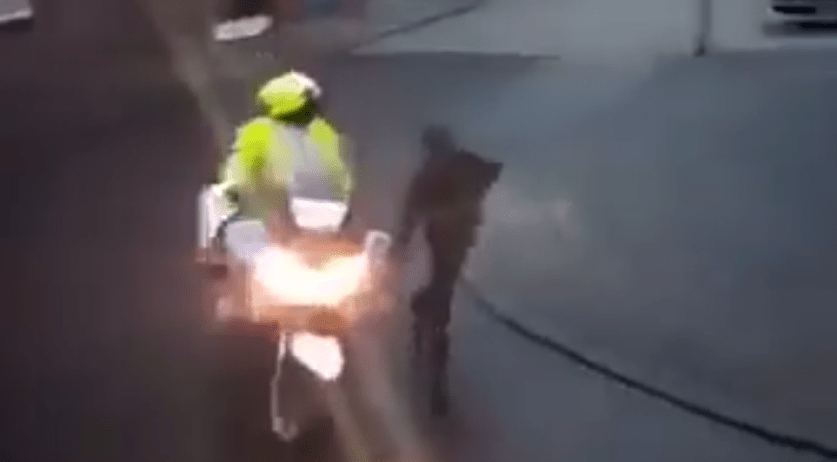 "Incidents wit an emphatic racist undertone increasingly occur in the Netherlands and also within the police force of Almere. This trend must be stopped immediately." reads a letter given to Almere Mayor Annemarie Jorritsma from representatives of the African and Surinamese community in the Netherlands. The letter refers to the incident in Almere last week, in which a 13 year old boy was forced to run along a police officer's motorcycle after being arrested. Bystanders filmed the handcuffed boy running along the motorcycle through the city of Almere and posted it on the internet. Witnesses recently told newspaper AD that the boy was arrested after a noise complaint. According to NRC, the letter was delivered to Mayor Jorritsma at the town hall, accompanied by about 50 people carrying banners and singing the Suriname national anthem. In the letter, Committee Boni - named after Surinamese guerrilla fighter Boni who fought colonialists in the 18th century - express its concerns about "the Dutch police's abuse of power towards citizens of African descent". They call the incident with the motorcycle cop "very dangerous" and "degrading". They call on the mayor to take the necessary measures and ask for a meeting with the mayor and police "to prevent such incidents in the future". The letter is signed "On behalf of the concerned citizens of Almere, The parents of the victim, Committee Boni" The full letter can be read here: Page 1, Page 2. The police have started an investigation into the conduct of the officer involved. The officer has been taken off the street and will work only in the police station while the investigation is ongoing. According to Omroep Flevoland, the mayor will wait for the outcome of the investigation before commenting on the letter. https://youtu.be/V1gXMZAv48k