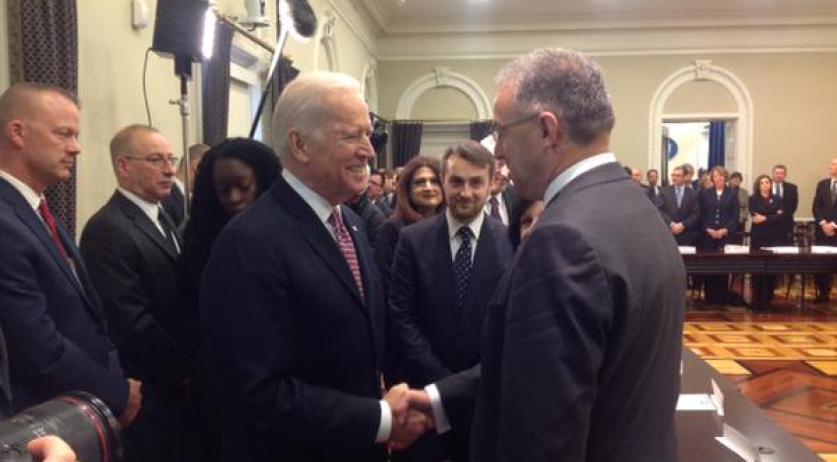 Rotterdam mayor: being Muslim gives "additional authority" to say what others won't

Rotterdam Mayor Ahmed Aboutaleb says he has more authority to make bold statements compelling extremist Muslims to get out of the country than do his European colleagues. The Moroccan-born Dutch Mayor said this in an interview with CNN, after speaking in Washington, D.C., about the role of local governments in battling radicalization and extremism. "I’m not only a mayor of the city but I’m also a Muslim,” Aboutaleb said, adding that this perhaps gives him “the additional authority” to say what his colleagues in Europe and the US “are not maybe authorized to say.” In January, Aboutaleb made a now-famous speech following the Paris attacks, in which he told Muslims living in the Netherlands who are not prepared to live within the country's ideals to leave. Aboutaleb told CNN he stands by his statements. "If you reject the freedoms, then you need to examine if you want to be with us. There is another option: you can leave our society," he said. "If you threaten us, you go to Yemen, you learn to use a Kalashnikov, you come back to threaten the society, well, you are not part of my we-society, you better leave." Aboutaleb attended the Washington conference on invitation by US President Barack Obama. The meeting focused on tackling radicalization and extremism in the wake of the Paris attacks over six weeks ago, and delivered a speech to the gathered leaders. "We need to ensure that international conflicts do not degenerate into hostilities in our streets," he warned, pronouncing radicalism as a powerful danger. "You are never completely safe from people who are willing to die for their delusions," he said. "I am one of the people who knows how it is to live in poverty," Aboutaleb told CNN, recalling how he lived on one meal a day until he was 15. "I cannot accept that poverty leads to terrorism." "The 16 million Muslims in Europe and 2 million in the United States can show that their religious beliefs can be perfectly combined with our Western values. It is they who can dispel the turmoil and doubt that lives within society. I am convinced that they play a key role in putting out this fire," he said. The Rotterdam mayor also called on the Muslim community to "take action and make their voices heard more loudly." In his speech, Aboutaleb named four points as "crucial" to reducing the dangers of radicalism: strong access to information (gained by trust of citizens and communication with public); offer prospects to young people to reduce receptiveness to extremist ideas; set and monitor boundaries; and call upon residents to enter into dialogue. A copy of the speech was provided to the NL Times by the municipality of Rotterdam.