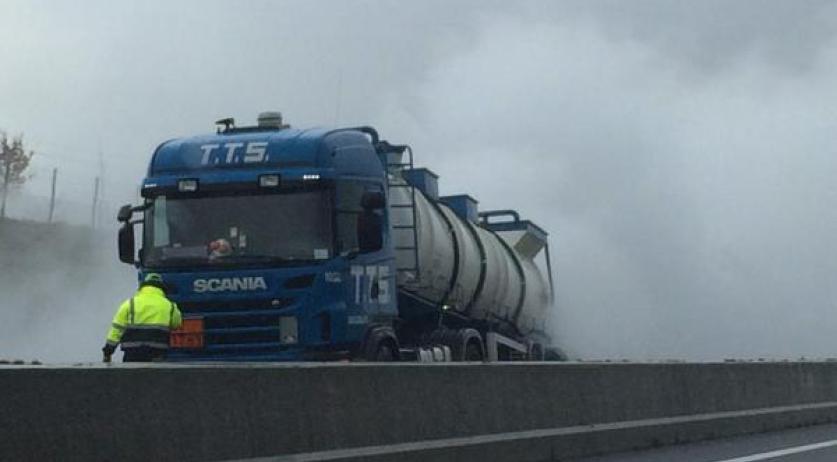 A part of the A73 highway between Nijmegen and Maasbracht is closed due to an accident involving several vehicles. One of the vehicles is a truck leaking a large quantity of hydrochloric acid. The road is closed between Linne and the junction of Het Vonderen.  The police say they will stop anyone without a protective suitnd the Ministry of Infrastructure and the Environment advices all motorists to stay in their cars. Because of the toxic fumes from the truck, traffic monitors recommend all the motorists to keep car windows and doors shut and to switch the ventilation system to internal air circulation. Cars will likely be evacuated as the afternoon progresses. The Noord-Limburg safety region has asked area residents to keep their windows and doors closed. Trains between Roermond and Sittard stations are shut down as well and no bus will replace the line for the time being, the NS said at about 2 p.m. At least an extra hour will be added to the normal travel time and the train company does not yet know how long the shut down will be in effect. The safety measures have scaled up to a GRIP 3 alarm, signaling that a wide area is affected. The third-level GRIP, or coordinated regional incident management plan, requires the mayor of the area to meet with policy advisors to monitor the situation and adjust their response as required. The Minister of Interior is also notified by the National Crisis Center (NCC), along with the King's Commissioner for the province. Grip 3 ranks just sort of an official "disaster" classification. Traffic must detour from both directions. Road users do from the south via Eindhoven (A67 / A2). Traffic from the Nijmegen area will be diverted via the N273.

#A73 highway in Netherlands: accident with ruptured tank of lorry with #hydrochloric #acid #HAZMAT @BertBrugghemans pic.twitter.com/UWbgad7yGC