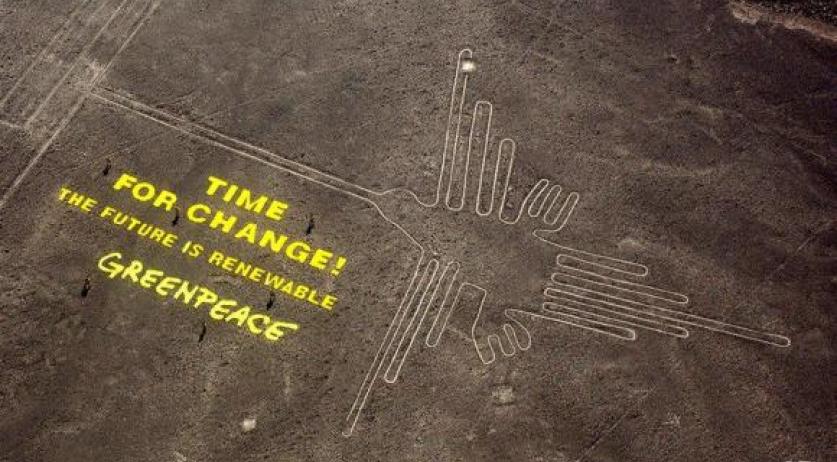 Greenpeace has issued an official apology for placing a banner next to a figure of a humming bird at the ancient Nazca lines in Peru. The publicity stunt was meant to increase pressure on UN negotiators currently meeting in the Climate Summit in Lima, BBC News reports. The ancient depictions of animals were carved into the arid plain of Southern Peru more than 1,500 years ago and are an important part of the country's heritage. Visits to the site are very closely supervised and special measures are taken not to damage the fragile ground where the lines are cut. On Monday, 20 Greenpeace activists unfurled a banner very close to the lines. "With our message from the Nazca lines, we expect politicians to understand the legacy we need to leave for future generations", said Muaro Fernandez, one of the activists, on a video produced by Greenpeace. "It is not a legacy of climate crisis. It is a legacy of renewable power. It is a legacy of change." According to Peruvian authorities, the publicity stunt did damage to the site. The Greenpeace activists left footprints in the strictly prohibited area. "It is a true slap in the face at everything Peruvians consider sacred", Deputy Culture Minister Luis Jaime Castillo said to the press. The government is threatening the activists involved with prosecution. Greenpeace has now issued a formal apology. "Without reservation Greenpeace apologizes to the people of Peru for the offense caused by our recent activity laying a message of hope at the site of the historic Nazca Lines. We are deeply sorry for this." the apology reads. It also states that Greenpeace will welcome an independent review of the consequences and will fully cooperate with any investigation. "Greenpeace is accountable for its activities and willing to face fair an reasonable consequences." The International Executive Director of Greenpeace, Dr. Kumi Naidoo, will travel to Lima this week to offer the apology in person. "We fully understand that this looks bad. Rather than relay an urgent message of hope and possibility to the leaders gathering at the Lima UN climate talks, we came across as careless and crass." the apology reads.