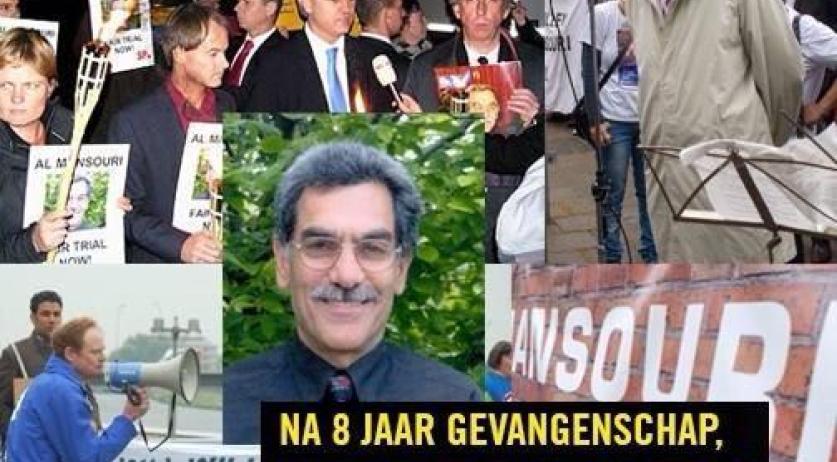 After spending eight years in a jail cell in Iran for suspected terrorist activity, Dutch-Iranian human rights activist Abdullah al-Mansouri is free ad back in The Netherlands. The 69-year-old's son tells the ANP that Iran has released Mansouri.  In 2006, Mansouri was arrested in Syria. He was extradited to Iran where he was given the death sentence a year later for terrorist activities. In 2009, his death sentence was turned into a life sentence. After a long battle from The Netherlands, urging Iran for a fair trial and attempts to gain access to the activist it seemed that Mansouri would be left to his lot in Iran, who saw the activist as an Iranian and wanted to convict him locally. Amnesty International protested for his release. Dutch Foreign Affairs Minister Frans Timmermans is relieved at Mansouri's early release and is thankful to the Iranian government for its co-operation. Amnesty believes that the Ahwazi Arabs are being disenfranchised by the Persian majority in south-western Iran. Mansouri was president of the Ahwaz Liberation Organization (ALO) which argued for an independent state for the Ahwazi Arabs in the oil-rich region of Iran. The activist fled to The Netherlands in 1988. He received refugee status and finally received a Dutch passport. He lived in Limburg with his wife and children. Together with Amnesty group Maastricht, Mansouri still campaigned for the rights of minorities in iran. For this, Mansouri received the royal decoration as Member of the Order of Orange Nassau. Amnesty International is also in a state of relief. "After eight years there is an end to imprisonment, injustice and insecurity", director Eduard Nazarski tells the NOS. He says that the release of the activist shows how important it is to call attention to people who are detained after an unfair trial. "All our demonstrations and wakes, in The Hague as well as in Mansouri's residence Maastricht, have made it so that he was not forgotten." Minister Timmermans says that family and friends "can now put this difficult period behind them."