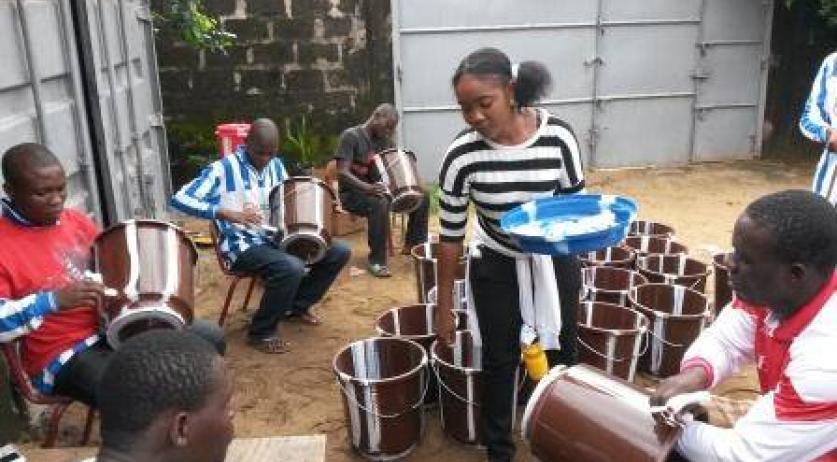 In Liberia, Dutch Anneke de Kok-Quoi and her Liberian husband have started a campaign to prevent the spread of Ebola. Her message is one of sanitation, as she donates free buckets with lids for people to wash their hands with. This prevents infection. The Algemeen Dagblad reports. Anneke from Papendrecht is scared, "but I cannot get myself to leave these people to their fates", she tells the paper. She is currently in Liberia's capital Monrovia, where she has set up a small team with her husband Mambu Quoi, who give out free buckets to poor suburbs. "The first priority is washing hands", she says. "You can already prevent so much with that. We give out buckets with lids and a tap wherever we can. People fill them with water and a few drops of chlorine. This has a disinfecting effect." So far, the couple and their team have given out 1600 buckets. Starting with neighbors and friends, she has built up a relation of trust with locals. According to Anneke, some of the people are wary and mistrusting of bigger aid organizations. This is just the start for Anneke and her team, however. There is much more that needs to be done. On an island close to her home, 30,000 people live close together without many resources. The roads to this neighborhood are bad. "For this place alone, we need at least 2500 buckets." Each bucket is worth 25 dollars on the street, but Anneke and her team can buy them for less than €6. Their team needs donations to keep the project going. Anneke's project is called Manneka. The organization installs public water wells, and organizes the maintenance for water supplies. On their Facebook page, the organization pleads for donations. Liberia has been devastated by civil war, and the country's borders have been closed in the struggle to keep Ebola out. This does not make Anneke's job easier. Flights are sometimes blocked. These flights carry the water buckets that the project needs. "But you go on, there is other work to do as well. Informing people about Ebola, for example. We try to get neighborhoods to do hand-washing." The virus has already spread up to a kilometer away from where Anneke and her husband Mambu live. This scares Anneke, but she is not leaving unless the Dutch embassy tells them to leave. "Liberia is one of the poorest countries in the world, they won't make it without our help."