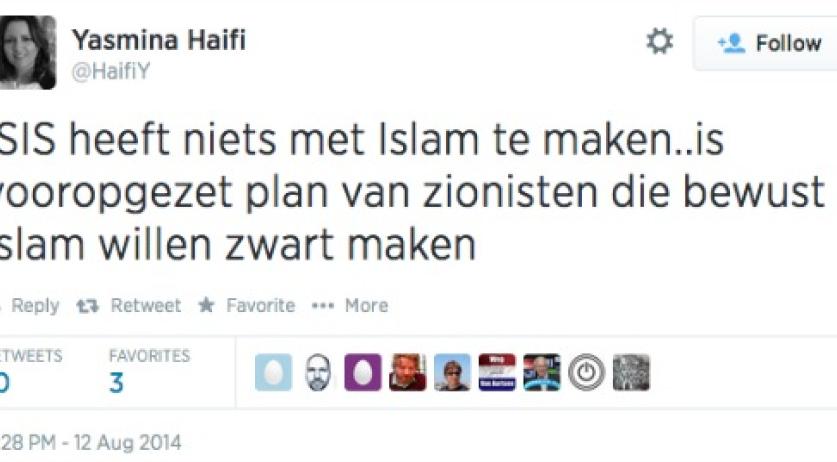 A project management official at the Dutch National Cyber Security Center has been suspended after tweeting that the terror group ISIS did not exist, and was instead a Zionist plot to stain the image of Islam. "ISIS has nothing to do with Islam,” Yasmina Haifi wrote. “It is a preconceived plan of Zionists who want to deliberately make Islam look bad."

[[{"type":"media","view_mode":"media_large","fid":"20334","attributes":{"class":"media-image aligncenter","typeof":"foaf:Image","style":"","width":"410","height":"206","alt":"Photo: Twitter"}}]] The Ministry of Security and Justice and the National Coordinator for Counterterrorism and Security (NCTV) responded in opposition to Haifi’s tweet. "Security and Justice and the NCTV distance themselves from her remarks,” the government said in a statement. “And since [the comment] relates to the work of the NCTV and the National Cyber Security Center, cause is shown to terminate her assignment NCSC/NCTV and outsource her work with immediate effect.” In an interview with Radio 1 this morning, Haifi said she will not take back her statements, saying she has the right to speak her mind. "Freedom of expression is apparently only for certain groups,” she said. “I have taken the liberty to express myself and obviously I have to pay for it. I do not know why I should take it down; this is what I think.” MPs Joram van Klaveren and Louis Bontes expressed this morning that they want Security and Justice Minister Ivo Opstelten to take action against the official. Van Klaveren and Bontes said in a joint statement that "a person who propagates such ideas and is working with state secrets could be a threat to national security." Haifi has since removed the statement from her Twitter feed, saying, "I realize the political sensitivity in relation to my work. This [public reaction] was never my intention,” she tweets.