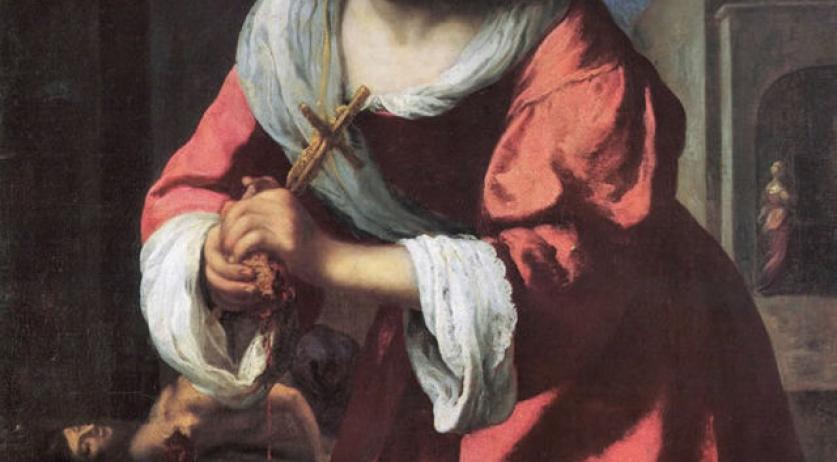 A painting by Dutch Golden Age master Johannes Vermeer sold at auction 6.2 million British pounds (€7.8 million) at Christie’s auction house in London on Tuesday. “Sint Praxedis” shows Saint Praxedis, the supposedly virginal daughter of Saint Pudens, a former Roman senator, and sister of Saint Pudentiana, squeezing out a sponge saturated with the blood of a martyr into a chalice. The painting’s estimated value was set at six to eight million pounds. The auctioneer struck his hammer after the final bid of 6,242,500 pounds was placed, according to Christie’s Twitter account. Art historians had expressed skepticism for decades whether or not Vermeer actually painted the piece. Questions were largely cleared up after research conducted by Christie’s with Amsterdam’s Rijksmuseum and Vrije Universiteit showed that that white lead paint used in Vermeer’s “Diane and Her Nymphs” is identical to that used in “Sint Praxedis.” “Sint Praxedis” was sold from the collection of the late American Barbara Piasecka Johnson, the Polish-born former maid who married her employer, J. Seward Johnson, the son of a co-founder at Johnson & Johnson. She had been listed on the Forbes 400 World’s Richest People list, and largely worked as a humanitarian and philanthropist. Vermeer is only thought to have painted about 45 different works in his career, of which only a handful are owned by private collectors. “The Concert” was stolen from a museum in Boston in 1990 and has yet to be recovered. His most famous work, “Girl with a Pearl Earring” hangs in the Mauritshuis in the Hague.