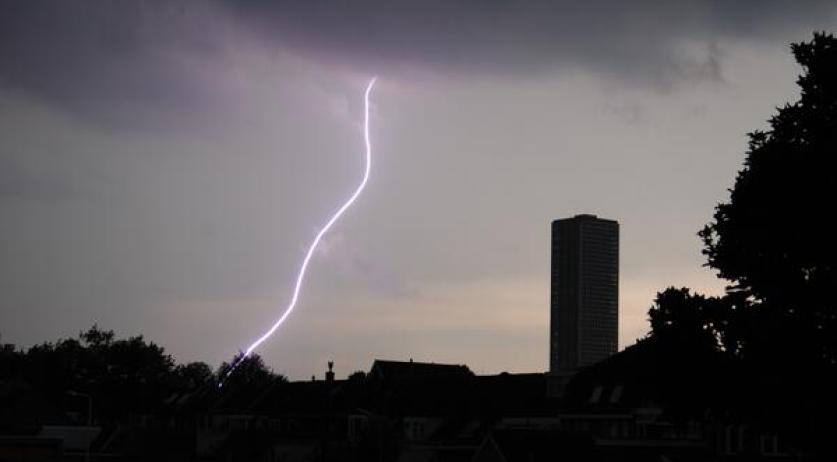 At least five people died in western Germany Monday night in severe thunderstorms that delivered high winds, rain and lightening. Three people were killed in Dusseldorf after an uprooted tree crashed down on the shed where they were hiding. Another person riding a bicycle in nearby Cologne was also struck by a falling tree. The 50-year-old was pronounced dead at the scene. A fifth person died in Essen while cleaning up damage to the storm, but details on the cause of his death were not released. All three cities are in the German province of North Rhine-Westphalia, said to be the hardest hit region in the country. The Dusseldorf airport closed amidst wind gusts peaking at 150 kilometres per hour, and residents in the province dealt with power outages and damaged tram lines that ground public transportation to a halt. Just across the border, Dutch music festival Pinkpop continued throughout most of the evening despite extreme weather warnings issued by Dutch meteorologists. Roughly 60,000 people attended the festival in Landgraaf, Limburg, about 90 kilometres west of Cologne, Germany. Revelers were cautioned to squat down on the ground as the lightening and rain passed across the wide-open field where the festival is held annually. Audience members were told to stay away from all poles, stages and tents, according to newspaper NRC. The decision to continue the Metallica-led showcase was met with criticism across the Netherlands. Meteorologist and television presenter Margot Ribberink chastised the festival organizers, with some pointing out that the weather alert had been raised to a Code Red at its peak. Newspapers around the country also published editorials questioning Pinkpop’s continuance. Landgraaf Mayor Raymond Vlecken countered the arguments on Limburg radio station L1 saying they were prepared to evacuate the festival, choosing instead to instruct the audience to stay low to the ground. He said he was proud that, despite increasingly loud thunderclaps, there was no sense of panic in the crowd. The choice to carry on with the festival drew comparisons to the 2011 edition of Belgian festival Pukkelpop, where five people were killed and 140 injured when storms destroyed stages, light towers and video screens. Winds at that event were believed to have hit 170 kilometers per hour.