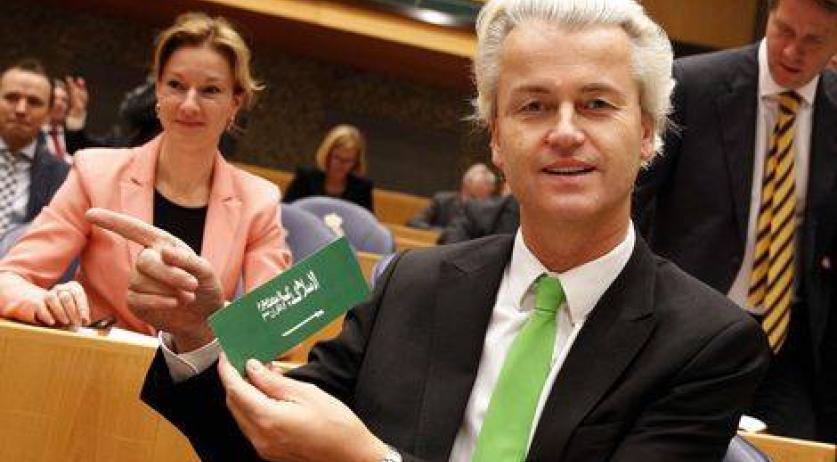 The Dutch minister of Foreign Affairs, Frans Timmermans (PvdA) will "shortly" be traveling to Saudi Arabia to try and find a solution for the conflict that arose around the anti-Islam sticker action of Geert Wilders. His spokesperson told press office Novum this morning that there are "good indications" that the conflict can be solved.  A head civil servant from Foreign Affairs returned from the region this morning. The current tensions between the Netherlands and Saudi Arabia were brought on by a sticker action from Geert Wilders, which he started last December. Wilders spread around a sticker that looks very much like the Saudi flag, but with the written Islam creed replaced by religious sacrilege towards Islam. "Islam is a lie, Mohammed is a criminal, the Qur'an is poison." The PVV-leader sent one to the Saudi embassy in The Hague. The country is very offended, and is treating this incident as an insult to the flag and to the religion of Islam, which is a crime in Saudi Arabia. Saudi Arabia is now reportedly discussing sanctions against the Netherlands. The Saudi newspaper Al-Eqtisadiah reported last week that the government is instructing the consumer trade sector to shut out Dutch businesses from ongoing or future projects in the country, the NRC reports. The status of the measure, and how far it reaches is as of yet unclear. Minister Timmermans said this morning that Saudi Arabia is "deeply offended by the sticker action." This is why the minster is taking it upon himself to personally travel to the country to try and smooth out the incident, though his departure date is not clear. According to the NRC, this will not happen very soon, but it will happen soon. The minister, as well as the Prime Minister Mark Rutte, have both stepped back from Wilders' sticker-action, and emphasize that it is not the belief of the Netherlands, nor of the Dutch government. Dutch exports to Saudi Arabia accounted for almost €2.26 billion for Saudi Arabia in 2013. There are long-term contracts at stake for chemical products, live animals (chickens) and pipe lines. In 2013, the Netherlands imported around €4 billion worth of goods from the country, namely crude oil. Companies such as Strukton, Philips, Fugro, Shell and Arcadis are active in Saudi Arabia.