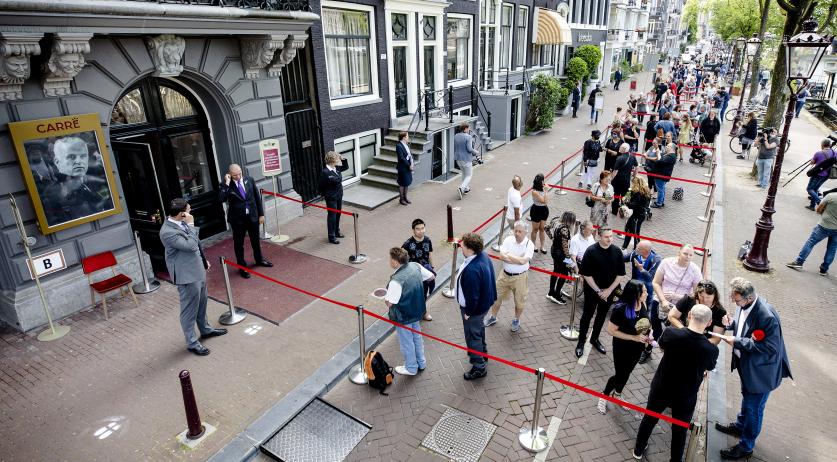 "Peter fought to the end but was unable to win," the murdered crime writer's partner said in an interview with the Volkskrant, published on the day of his funeral. "We are immensely proud of him and at the same time inconsolable." Some 7,500 people attended his public memorial in Amsterdam on Wednesday.

Peter R. de Vries was gunned down in Amsterdam, shortly after leaving the RTL Boulevard studio, on July 6. He died in hospital on July 15. His partner of six years, who always remained out of the spotlight by choice but is now forced to stay anonymous for her own safety, was a constant presence in the hospital while De Vries was fighting for his life.

"Those were were awful, grueling days," she said to the newspaper. “I now know exactly what the saying living between hope and fear means. I'm not a believer, but I've prayed, though I don't know who I was addressing.”

She and Peter met in a make-up room through their work. Where she was not previously attracted to him at all when she saw him on television, they described the moment they met like a “lightening strike.”

On the night of the shooting, they were going to view a house in Utrecht where they would finally live together. She was nearly at the house when Royce de Vries, Peter's son, called her to tell her what had happened. “I immediately started screaming. When I called Peter and he didn't answer, I knew, ‘This is wrong.’ He always answered when I called, even when he was in the middle of a meeting. After he didn't respond to my texts either, I knew it was true.”

She is still being guarded since the attack on July 6. Said she had “heated discussions with him” about his safety, and was against him working with Nabil B. in the Marengo trial. “But I also understood why he wanted to do this: as a crime reporter of that caliber you want to be involved in such a mega criminal case. But now I'm left wondering if I could have done more to stop him. That question will always haunt me.”

She said she still finds these little notes he would leave around the house in random places for her to find at random moments. “I know I'm going to find more notes," she said. “I also found one when I was driving home from the hospital to pick up clean clothes. I collapse with every discovery. It's like I'm only now realizing how valuable they are. As if only now did I realize how special that is."

Peter's loved ones will say their goodbyes to him in a private funeral on Thursday. A public memorial was held in the Royal Theater Carre in Amsterdam on Wednesday. Thousands of people lined up to get a chance to say goodbye. The memorial was open between 8:00 a.m. and 10:00 p.m., two hours longer than planned.

"I find this terrible, it hurts me very much," a woman said to NOS while waiting in line at the Carre theater. "It's heartbreaking, it gives me goosebumps." Another person said: "This is actually the last thing we can do for Peter R. de Vries, to let him know how much the Netherlands loved him."

A spokesperson for Monuta, who organized both the public and private memorials, told the broadcaster that the public memorial was peaceful and respectful. "We saw many different people from all walks of life and from all over the Netherlands. Peter handled a lot of cases in his life and met a lot of people. He meant a lot to all those people."

De Vries' family thanked everyone who attended the memorial. "It is heartwarming to see so many people come to pay Peter one last tribute," his son Royce said on Twitter.