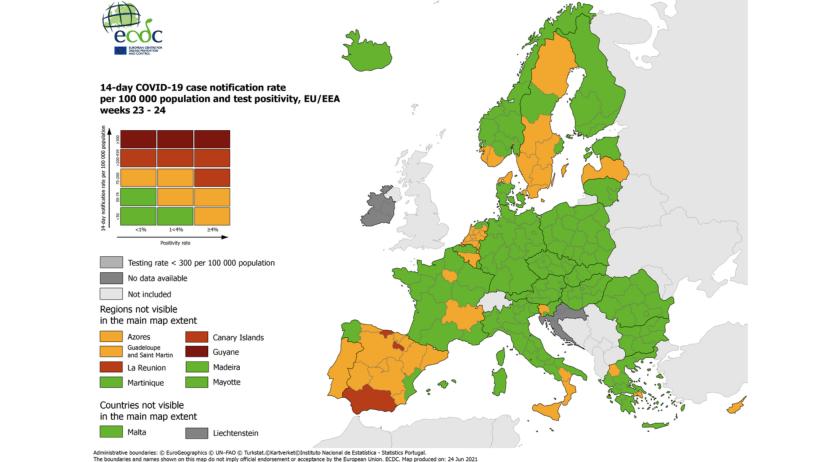 The European Centre for Disease Prevention and Control downgraded its coronavirus warnings for the Netherlands on Thursday, reducing the alert to the orange level for most of the country. The situation has even improved enough to place Friesland and Groningen at the green level, signifying the lowest risk.

The Netherlands had been the only country entirely at the red level, the second worst of four risk categories. The map is updated weekly.

A dataset provided by the ECDC showed that the national coronavirus positivity rate in the Netherlands has fallen to 3.02 percent, on its own enough to reduce the alert level nationally. It also showed that 87 people in the country tested positive for the SARS-CoV-2 coronavirus per 100 thousand residents over the past two weeks, though preliminary data from the RIVM suggests that figure has improved even faster.

Friesland's cumulative per capita infections during that time was 43, and it was 46 in Groningen. Anything below 50 with a positivity rate below 4 percent is below the threshold for the green level.

The RIVM said on Thursday that another 716 people tested positive for the SARS-CoV-2 coronavirus, bringing the seven-day moving average down to 724. That figure has been approaching a 10-month low.

For the first time since September 20, hospitals in the Netherlands were treating fewer than four hundred patients with Covid-19. The patient total fell by a net decrease of eight percent to 392.

That included 158 people in intensive care units, down 12 since Wednesday. Another 234 patients were in regular nursing wards, a drop of 21.

The combined patient total was 32 percent lower compared to a week ago. There will be fewer than 270 patients in care next Thursday if the same reduction is repeated over the next seven days.

Just 12 people with Covid-19 were admitted to Dutch hospitals since Wednesday afternoon, including one who was sent to intensive care.

Just over 201 thousand people were given a Covid-19 vaccine shot on Wednesday, bringing the total up to 14,477,525. Overall, the seven-day average for vaccinations has been on a steady decline for ten days, and fell to 201,450.

The 15 millionth shot will likely be administered on Saturday.