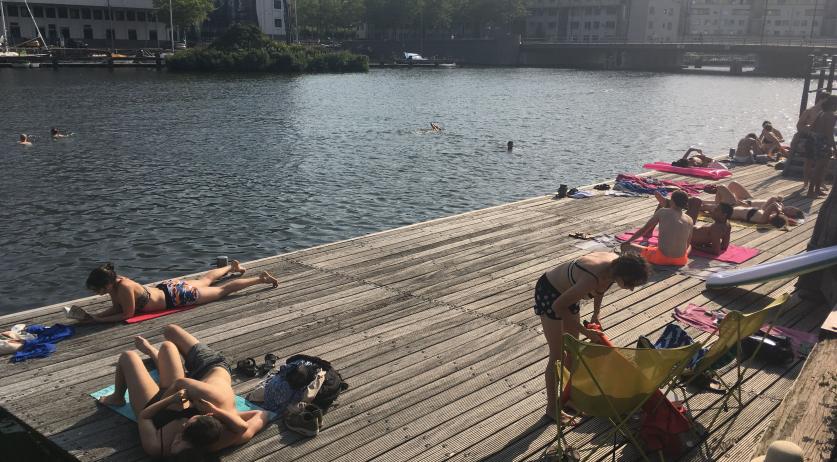 With tropical temperatures arriving in the Netherlands, many residents are looking for a refreshing dip in recreational waters. Swimmers were cautioned that they need to acclimate to colder water on days of extreme heat, and that they should avoid places where the presence of blue-green algae has been detected.

Immersing oneself in cold water too quickly can lead to shock. The body’s reaction to sudden cold carries enormous risk and can lead to hyperventilation. Ultimately, a person's muscles lose their strength resulting in swimming becoming more difficult.

Swimmers are therefore advised not to get into the water right away but splash themselves with water and make sure their breathing is relaxed before submerging.

Infrastructure agency Rijkswaterstaat, the local water boards, and provincial warn that people should only swim in treated or approved natural water spots. A special website lists hundreds of safe swimming sites that can be found across the country, which are regularly monitored. Residents are always advised to check if their destination of choice is included on the list before going for a swim.

Blue-green algae is a type of bacteria that multiply as the temperature of still water rises. This creates thick floating layers that can irritate the skin and eyes when swimming in them. If you ingest it, it can make you nauseous and cause abdominal cramps or diarrhea.

According to Rijkswaterstaat, swimming is not only dangerous in many places, but also prohibited. Swimming in the shipping lanes of large rivers, ports and locks can result in a fine of 150 euros, just like jumping or diving from bridges. People swimming near waiting areas or mooring places for ships, or in the routes of ferries, also risk equally severe punishment.

"Swimmers are barely visible to those on board an inland vessel. The skipper cannot have a view of the water surface further than approximately 350 meters in front of his ship. The head of a swimmer that is further away than that therefore appears no bigger than a small dot," Rijkswaterstaat explains.

Officially, Wednesday was the first day this year where tropical weather was recorded at a locality. In the Limburg town of Ell temperatures reached up to 30.6 degrees Celsius at the KNMI weather station. It is considered a tropical day nationally when the mercury hits 30 degrees in De Bilt, Utrecht. The home of the KNMI is also considered to be the meteorological center of the Netherlands.