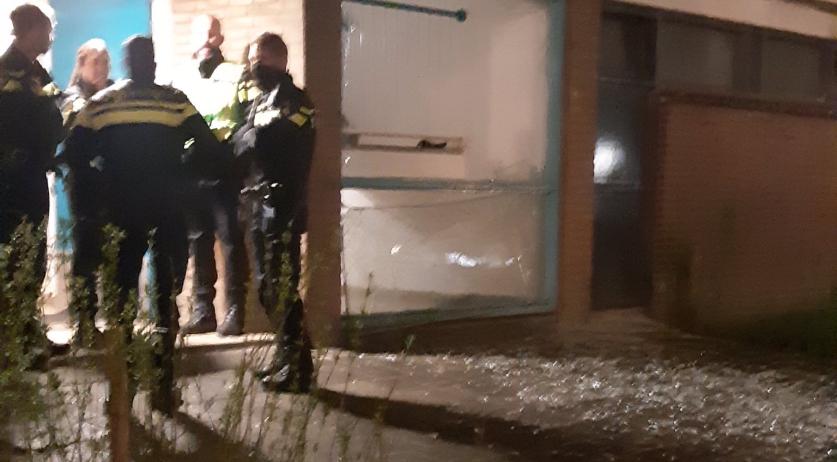 An explosion blew out the glass at an apartment building on De Blecourtstraat in Rotterdam. 7 May 2021 - Source: Politie Rotterdam at Twitter
Crime
Rotterdam
firework bomb
explosions
Feyenoord
Share this:

Three explosions likely caused by firework bombs occurred in different locations in Rotterdam early Friday morning, police confirmed. There was a great deal of damage caused at each location, but no injuries were reported.

The first blast happened at a café on the Kreekplein in Rotterdam-Zuid at about 1:25 a.m. To extinguish the fire that started after the explosion, the fire brigade had to demolish part of the ceiling. According to the police, windows and doors were damaged.

About 25 minutes later, there was also a blast at an apartment building on Forelstraat in the Hoogvliet neighborhood. The explosion heavily damaged the porch. Some exterior doors for the ground floor apartments were damaged, and a number of homes had to be temporarily evacuated.

The third incident took place at about 3 a.m. off De Blecourtstraat in the Schiebroek district. Similar to Hoogvliet, residents were asked to leave the area as a few homes were evacuated after the explosion occurred on an apartment porch.

On Wednesday, another explosion occurred in a café located a few kilometers from the Kreekplein incident. It was also likely caused by a firework bomb. Both cafes are known as places frequently visited by supporters of Rotterdam football club Feyenoord.

It is still being investigated whether the incidents are connected to the Feyenoord-Ajax game that will be played on Sunday. Police could not yet establish the connection between the incidents.