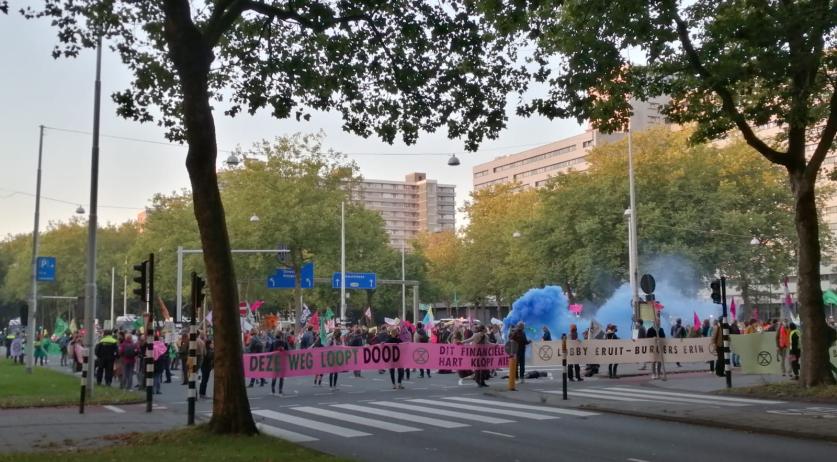 On Monday morning climate action group Extinction Rebellion blocked Europaboulevard, a busy intersection in Amsterdam at an on- and off ramp to the A10 highway. The police and riot police are at the scene and in the process of clearing the intersection, the Amsterdam police said on Twitter.

According to the police, about 250 climate activists blocked the road and refused to respond to requests for them to leave. They are now being and transported to another location with GVB buses.

Due to the coronavirus and social distancing measures in place to curb its spread, the activists are being removed in groups, a police spokesperson said to NOS. It may therefore take some time before the intersection is cleared. "The activists chained themselves together, so the intersection could not be cleared immediately," the spokesperson said.

Extinction Rebellion announced a series of protests in Amsterdam, starting on Friday. They want to draw attention to the climate crisis.

Mayor Femke Halsema, also head of the Amsterdam-Amstelland security region, limited weekend protests on Museumplein to 4 hours per day. Extinction Rebellion itself was responsible for making sure all protesters stay 1.5 meters apart and that public order was maintained. The city specifically banned any road blockades, and said that protesters were not allowed to spend the night on the square or street.

The demonstration on Damrak was aimed at clothing store C&A, which according to the protesters, sells clothing forcibly made by Uyghur people, an ethnic minority that has long been oppressed by the Chinese government, NU.nl reports. Four protesters were arrested for trespassing after they entered the store. Two were arrested for vandalism, after they wrote slogans on the store's windows with chalk.

On Friday, Extinction Rebellion responded to mayor Halsema's restrictions on Twitter. "Mayor Halsema announced that civil disobedience is disobedient. Thank you Captain Obvious. Our actions will of course continue. Because the climate crisis is not waiting for politicians."