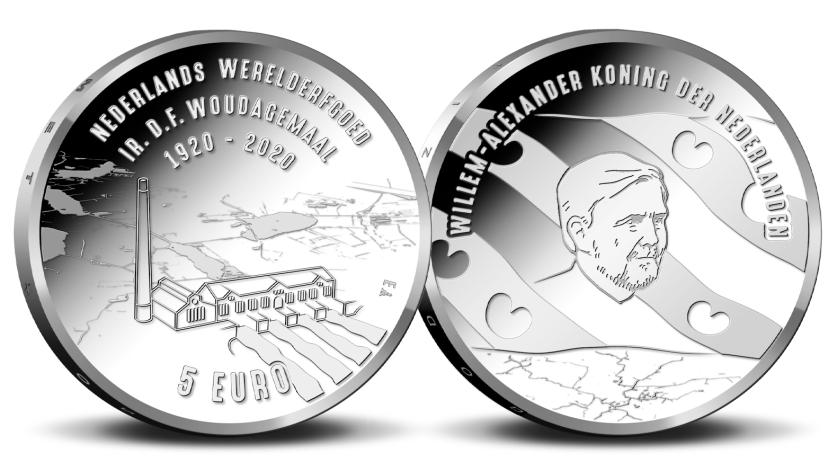 A new commemorative five-euro coin will be the first to feature Dutch King Willem-Alexander with a beard. The flag of Friesland is shown flapping behind the king on the coin, which was commissioned by the Ministry of Finance and will be produced by the Royal Dutch Mint beginning on October 7.

That date is the 100th anniversary of Queen Wilhelmina's opening of the Woudagemaal, a massive steam-powered water pumping station in Lemmer, Friesland. The pumping station, one of ten UNESCO World Heritage Sites in the Netherlands, is featured prominently on the reverse of the coin.

"The sluices connected to the station are drawn in the same angle as the strips of the flag on the obverse. On both sides of the coin, (parts of) the canals surrounding the Woudagemaal are depicted," the Mint said. "The coin pays tribute to the historical steam pumping station and Dutch water management."

The Mint also noted the importance of the Woudagemaal for water management in Friesland even 103 years after construction began. "The steam pumping station and the steam engines are attractions for architectural or steam enthusiasts."

The Woudagemaal 5 Euro Coin was designed by Berend Strik, who also designed a coin of equal value 14 years ago which featured Dutch artist Rembrandt van Rijn.