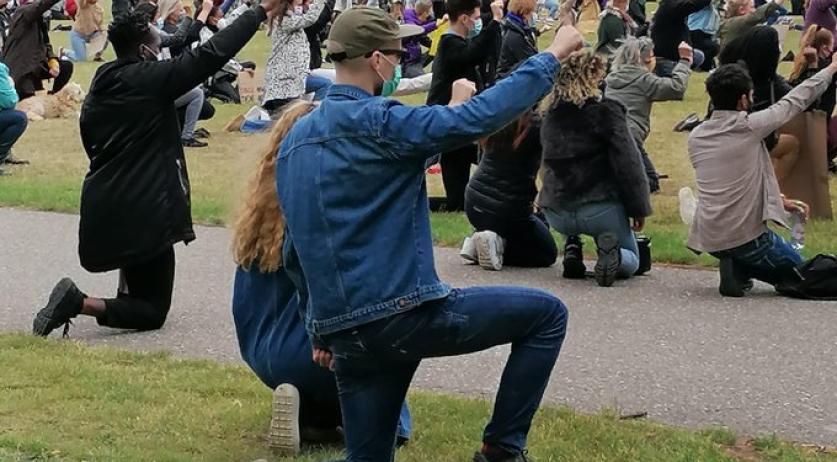 Action group Kick Out Zwarte Piet asked Prime Minister Mark Rutte be "firmer" in his condemnation of racism and discrimination in the Netherlands and the group is hopeful that he will do so. "I am happy with his progressive insight. There is hope," spokesperson Elvin Rigters said to NOS after meeting with the Prime Minister at his residence on Wednesday.

The Prime Minister and Minister Wouter Koolmees of Social Affairs and Employment met with representatives of the Black Lives Matter Nederland movement and Kick Out Zwarte Piet (KOZP), an action group that's been campaigning for the Netherlands to stop using blackface in its Sinterkaas celebrations for years. KOZP was also involved in arranging the Black Lives Matter protests in the Netherlands in June.

KOZP believes that the government is putting the problem of discrimination and racism too much on society's shoulders. "Politicians must take responsibility," Rigters said. He is therefore pleased that Rutte wants various Ministries to look for practical solutions to fight this problem in the field of public health, education and the labor market. This will happen in consultation with the anti-racism organizations.

"Discrimination is the worst thing that can happen to you," Rutte said after what he called a "more than good conversation", according to the broadcaster. "It still happens too often. We must not accept that."

Before the meeting, KOZP released a press statement saying that it is working on a 10-point manifesto for the fight against institutional racism in the Netherlands, which it plans to publish in the fall. The manifesto is based on meetings the group had with supporters and the Black community throughout the country on topics including education, politics and police violence. The delegation the group sent to meet with the Ministers on Wednesday consisted of "socially engaged individuals with close involvement in the fight against racism."

KOZP said it expected that this discussion would be "the first of many" to come to a concrete action plan in the fight against racism on a national and local level. A new meeting is planned for the end of September, to discuss the practical solutions the Ministries came up with. More Ministries will be part of this conversation, including Education, Home Affairs, Justice an Public Health. Other anti-racism organizations will also be invited.