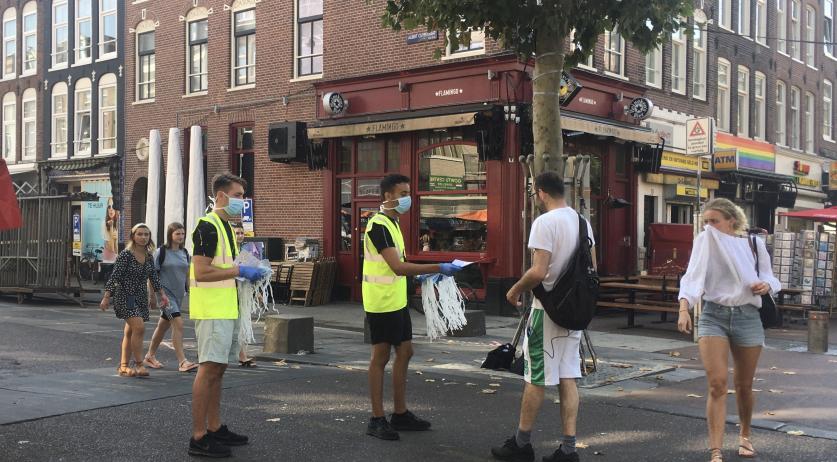 Visitors to a number of crowded areas in Amsterdam and Rotterdam will no longer have to wear a face mask from Monday. The local security regions are ending this experiment on August 31 as planned, they said on Friday.

Due to the weather being less hot, and the end of the main tourist season, it will likely be easier to keep 1.5 meters apart on the busiest places," Veiligheidsregio Amsterdam-Amstelland said. "The municipality will continue to monitor this and will, if necessary, implement information-driven and risk-oriented measures."

In Amsterdam, people were required to wear a mask on the streets and in the shops in parts of De Wallen, including the Red Light District, on the Kalverstraat and Nieuwendijk shopping streets, and on Albert Cuypstraat and Plein '40-'45. The city started fining violators of this rule this past weekend, issuing nearly 150 fines of 95 euros each.

The policies were launched on August 5, and adherence to the rules were spotty at best during the first three weeks. At one point, fewer than 20 percent of people at the market on Albert Cuypstraat were seen wearing masks, even as city workers were on site handing them out to people at no charge.

Retailers in both cities complained that they saw "substantially" fewer customers during the first week after the rule was introduced, though the sweltering heat could have also played a role in keeping people away from the normally-crowded shopping streets. Another study suggested that sales fell by 40 percent on shopping streets where the mask rules applied.

The impact of the face mask obligation in both cities was going to be reviewed and studied by the Netherlands Institute for the Study of Crime and Law Enforcement (NSCR). "A face mask can help people be aware of their distance and to comply with the coronavirus measures. The evaluation will examine whether wearing a face mask has resulted in behavioral change," the Rotterdam-Rijnmond Security Region said in a statement.

The Amsterdam-Amstelland Security Region stressed that businesses and organizations need to stay vigilant and ensure that customers can keep 1.5 meters apart as well as possible. The mask obligation could be reintroduced if the city's popular areas become too crowded again, and if the number of coronavirus infections increase.

“The City of Rotterdam would like to thank all entrepreneurs, residents in the pilot areas and visitors for their cooperation and understanding,” the Rotterdam-Rijnmond Security Region said.