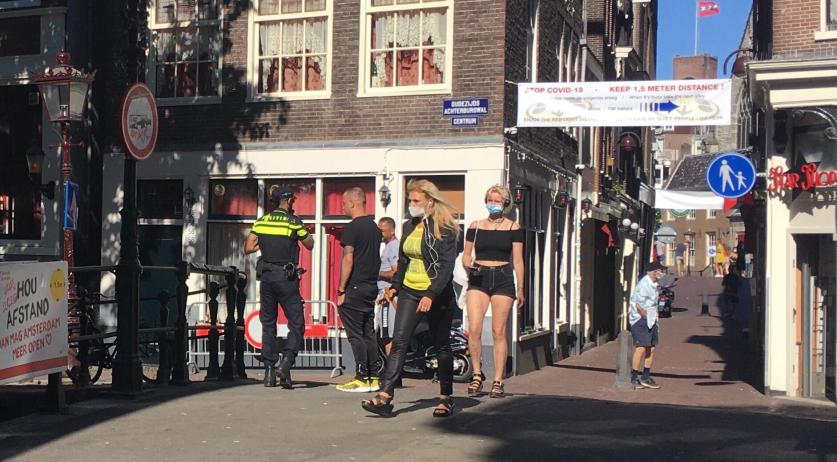 Seventeen days after a face mask obligation was implemented in five Amsterdam neighborhoods, the rule was going to be enforced more strictly starting on Saturday. The Amsterdam-Amstelland Security Region said on Friday night that police officers and other security patrols will be more likely to fine people 95 euros when they do not wear a mask on the street or in stores.

Amsterdam Mayor Femke Halsema, who also chairs the Security Region, said that fine could quickly escalate to 395 euros when someone outright refuses to comply with the mask rule. "Wearing a face mask in places where it is difficult to keep 1.5 meters away has become more necessary due to the sharply increasing number of corona infections in Amsterdam," the Security Region office said in a statement.

The mask obligation went into effect on Albert Cuypstraat, Kalverstraat, Nieuwendijk, Plein '40 - '45, and in parts of the Wallen, which includes the Red Light District. The rule was put in place as a temporary measure to determine if it would impact the rapidly escalating number of coronavirus infections in Amsterdam since early July.

"These are areas where it is tight and busy and where other measures lead to undesirable economic effects for entrepreneurs, such as early closure or traffic restrictions," the Security Office said.

Restaurants, bars, cafes, and sex work businesses are not subjected to the face mask order. The Amsterdam mask rule was set to expire at the end of August. A court case filed against the Security Office order was struck down earlier this week.