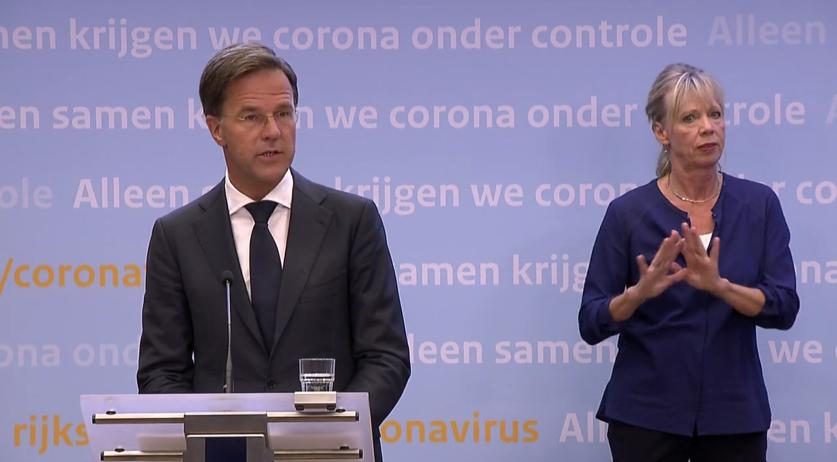 The Dutch government issued stricter advice to the public regarding the coronavirus pandemic, telling people to continue working from home as much as possible should remain the norm even after September 1, and to not hold gatherings of more than six people. "I will get straight to the point: the developments surrounding the coronavirus are not going well," said Prime Minister Mark Rutte at the beginning of a news conference Tuesday night.

The duration of home quarantine will also be reduced from 14 to 10 days.

The Prime Minister said his Cabinet was giving the "very urgent advice" to abstain from parties, happy hour drinks, or even get-togethers at home. The Prime Minister was critical of the developing situation among family and friends, where the majority of coronavirus clusters exists. "Wherever people trust each other enough to walk around in one room, shaking hands and hugging. That is false security. We are giving everyone very, very urgent advice not to organize parties at home," he said, offering cafes as a better alternative.

He said the advice of no more than six guests at home applies for everyone 12 years of age or older. Limiting guests also helps reduce the workload that the health services face with source and contact tracing, Public Health Minister Hugo de Jonge said at the press event. "We know very well that we are actually asking for something unnatural: Keep a distance when you want to hug and comfort each other," he said. "Being together is something human, but we are asking this for a good reason," he stated.

"If people get infected at parties, then dozens of people soon need to be called. The advice remains to stay at home and get yourself tested, but we notice that this does not always happen. As a last resort, we are investigating whether we can make quarantine mandatory," De Jonge stated.

The advice was given as there are now over 50 thousand people in the Netherlands contagious with the SARS-CoV-2 novel coronavirus. "It is not rocket science. If we are not careful, we will quickly return to where we don't want to be," Rutte said. "We do not want to experience the economic scenario of a second wave."

For those who are told to quarantine, but are unwilling to do so, De Jonge said it was legally possible to force someone into quarantine when they are not cooperative. "That is crucial to stop the chain of contamination," he said.

"We are taking these measures because people in healthcare are still recovering. Because we cannot afford to postpone cancer surgery, for example," De Jonge said.

During the press conference, De Jonge also noted that about 1,400 infections were linked to Amsterdam over the past two weeks. A day earlier, he singled out Amsterdam specifically, saying the capital city could expect extra measures along with Rotterdam, which also became a significant hotspot for the virus around the end of June.

"In cities where the figures are rising sharply, significant measures are needed," Rutte said. "That is what we want: locally where possible, nationally where necessary."

De Jonge also warned that if the situation does not improve, there could be new restrictions imposed on the catering industry. However he was positive about the fact that over 430 thousand people had already downloaded the government's coronavirus tracking app, Coronamelder, just one day after its public release. He said he also believed the app complied with privacy rules despite concerns raised by officials.

Before the press conference, there were rumors that the government was pushing mayors to put extra limits on large events, as the number of coronavirus infections continued to rise. Earlier on Tuesday public health institute RIVM reported that around four thousand new Covid-19 infections were diagnosed over the past week.

During the last press conference on August 6, Prime Minister Mark Rutte warned that the virus was "advancing dangerously". He called on Netherlands residents to adhere to the measures in place against the spread of the virus, and gave security regions more options to implement local measures.