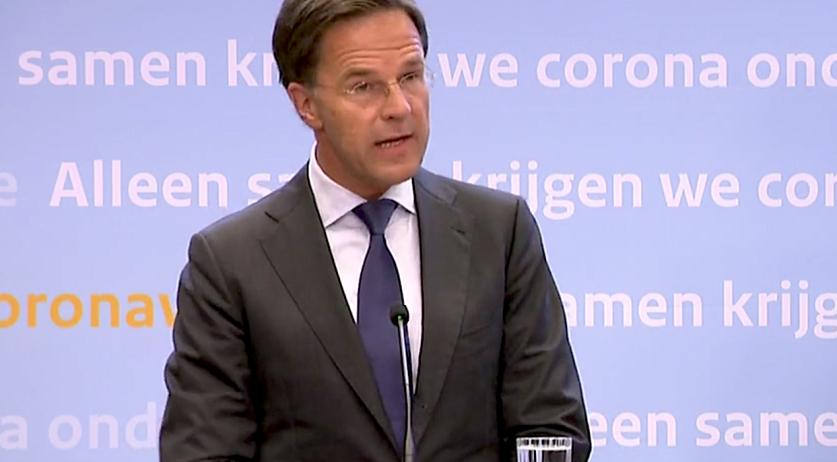 Rutte: "The virus is advancing dangerously"

Dutch Prime Minister Mark Rutte held his first prime time press conference since June 24 on the state of the coronavirus pandemic in the Netherlands on Thursday. He used the hour-long opportunity both to chastise people for ignoring the advice to keep a physical distance from others, to stay home with health complaints, and to get tested when health symptoms arise.

"The virus is advancing dangerously. The data does not lie. The number of infections has been increasing for a few weeks and we are in danger of losing the gains we have made," Rutte stated. "For God's sake, let's ensure together that the second lockdown is not necessary."

Public health agency RIVM has estimated that roughly 16,500 people were contagious with the virus on July 31, a figure which quadrupled since July 1. Just last week, nearly 2,600 tested positive for the viral infection, up from 450 in the first week of July.

Health Minister Hugo de Jonge also used the moment to express irritation by the lack of cooperation reported by some health services when handling contact tracing of an infected patient. "People now have dozens of contacts who also do not answer the phone, so to speak. If, on the one hand, people complain that the investigation is taking too long, and on the other hand do not cooperate, then we are not doing the right thing. Hence the strict tone, because we have to find our discipline again," he continued.

"The virus does not spread. We spread the virus. So guys, please use your common sense."

At the press conference, De Jonge stressed that people returning from areas where there are outbreaks of the SARS-CoV-2 novel coronavirus will need to stay home for two weeks and get tested by municipal health service GGD should they develop symptoms. The GGD will use airline passenger manifests to call travellers to see if they are complying with the advice to self isolate.

"We have thought about the possibility of a quarantine obligation," De Jonge said, but added that it did not seem logistically possible. "When people come back from 'Orange' countries, they will be met by people who will warn them and tell them what to do."

The Ministry of Foreign Affairs issues travel advisories based on a color scale where red is the most severe, orange equates to advice of only visiting that place if absolutely necessary, and yellow for places where caution should be maintained due to specific local risks. Since travel became more possible with countries lifting some entry and exit prohibitions, the Dutch government has advised that travellers follow both local rules as well as the national advice from the Dutch Cabinet.

Some businesses to close for 14 days when infections arise

Rutte also said it was disappointing to see that compliance with rules in the catering industry has decreased. Because of that, and the increasing number of coronavirus infections, all recreation businesses will have to close for up to two weeks if infections are discovered at those locations. These include catering locations, museums, cinemas, live theaters, and theme parks.

Additionally, all visitors to cafes, bars, restaurants and hotels will be required to provide their name and contact details upon entry to make source and contact tracing easier when a patient's history is researched. This was already mandatory in some municipalities, but now it will be the norm nationally. "The critical point has not yet been reached, but we are going to take measures locally and regionally," Rutte said.

For new higher education students, introduction weeks and initiation activities at the beginning of the school year will be strictly limited, but not cancelled. Student organizations and associations which want to hold events, will have to do so without alcohol. The events, which in the past have been known to continue on for hours, if not days, must come now come to an end by 10 p.m.

Physical activities will also only be permitted in very small student groups.

Municipalities and regions are an important line of defense

Because of the large regional differences, with more infections in the Randstad and very few in the northeastern provinces, Rutte said the Cabinet will rely on the country's mayors and the 25 regional security offices to build up new restrictions as they see fit. These can include mandating that people where face masks, stricter enforcement of social distancing measures, and banning audiences from sports competitions. Mayors can also cut down on opening hours of stores, restaurants, cafes and bars.

"Where it becomes necessary, we will scale up measures of a national nature," Rutte said.

"Unlike in March, we know where the virus is and where it is growing," De Jonge stated. "In recent weeks, this has been accelerating. Regions such as Rotterdam, Amsterdam and The Hague are cause for concern."

De Jonge said that being able to identify where the worst clusters are located makes it easier to contain them, something which the government was not capable of doing back in March as cases skyrocketed and hospitals filled up. "But make no mistake: there is cause for concern," he said. "We have to rediscover our discipline."

Those three cities have been the most affected by the recent spate in new coronavirus infections which started on July 3, and have worsened every week since. Roughly half of all 110 hospital patients, including 29 in intensive care, are from Rotterdam or Amsterdam, the two cities which introduced mandatory face mask rules in certain neighborhoods starting on Wednesday.

The Prime Minister has repeatedly said he was not in favor of face masks citing research which suggests their effectiveness is limited. However he was interested in the possibility that the masks encourage people to remain socially distant from each other.

"The mask, probably, does very little to prevent the transmission of the virus," Rutte said. "The one and a half meters is absolutely superior to the mask, which contributes little, but the mask can cause a change in behavior."

De Jonge said he was optimistic that a successful vaccine would be created within the first few months of 2021. The Health Minister said the country is also in talks with organizations representing the development of ten different vaccines.

"These differ in the type of vaccine and the speed at which they are administered," he said. While the country is working on behalf of all 27 member states of the European Union, he said the Netherlands is simultaneously monitoring the situation for its own national interests.

So far, the Netherlands, along with France, Italy, and Germany, has made one deal with AstraZeneca to purchase a vaccine being developed at Oxford University. Early results of that vaccine, named both AZD1222 and ChAdOx1 nCoV-19, have been promising.