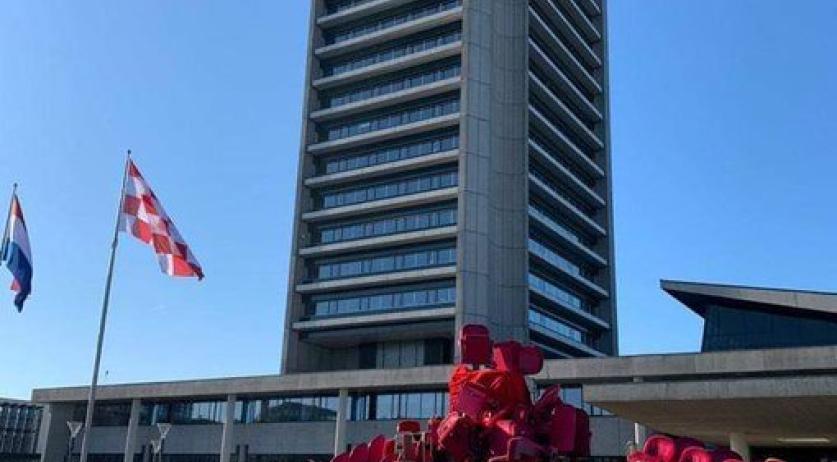 Two protests were held at the Noord-Brabant provincial house in Den Bosch on Friday, during the appointment of the province's new deputies. A huge stack of theater seats with giants unable to find somewhere to sit protested against the new coalition's lack of support for culture. And hundreds of denim jeans represented the Noord-Brabant residents who want more attention to be paid to the climate crisis, Omroep Brabant reports.

The new deputies includes a deputy of free time, but no deputy for culture. With that "the new provincial government offends the artists, performers and cultural institutions by putting them away as part of free time," according to the activists. The protest was arranged by Theater Artemis, Het Zuidelijk Toneel, Theater aan de Parade, and freelancers in the cultural sector. They piled up chairs from various theaters in a heap in front of the provincial house. Two giants, played by Wendell Jaspers and Jeste Batelaan, tried to find seats to a performance, but to no avail.

Former deputy of Culture Henri Swinkels (SP) was present at the protest. "My heart bleeds at the way they dismiss culture as a kind of hobby club. I think it is disrespectful to everyone involved in the culture sector," he said

Environmental organization Extinction Rebellion also protested at the provincial house. The group called on the provincial government to make livability on earth, and not economic growth, a precondition for the province's policy. And that honesty about the climate crisis be a spearhead of the policy.

As the coronavirus crisis made it impossible to have a group of protesters at the provincial house, Extinction Rebellion asked supporters from Noord-Brabant to send in jeans to represent them. The jeans were placed in a circle in front of the provincial house.