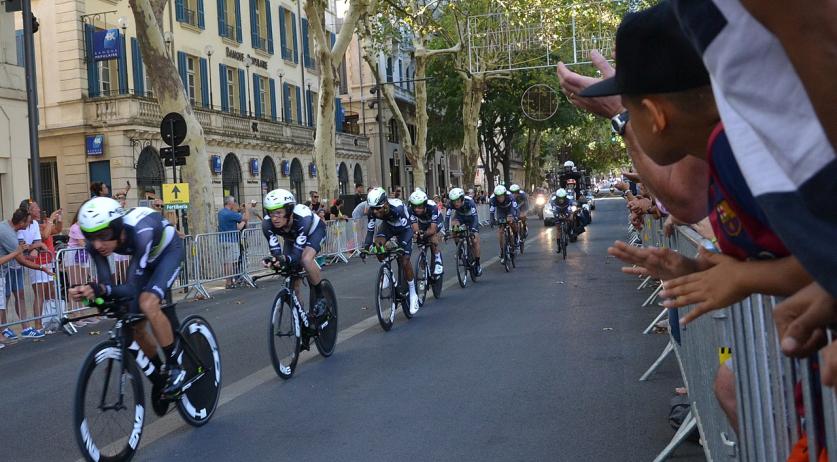 With the delay of popular Spanish cycling race La Vuelta, this year's ceremonial starting point of the race, Utrecht, has been kept in a holding pattern. The event has not been rescheduled, though a popular rumor floated by a Basque region newspaper suggests the 23-day race will start in Irun, Spain, and not in the Netherlands.

The rumor was dismissed by Dutch organizers at La Vuelta Holanda, who told NL Times it started as a fairly innocent comment during a radio interview with the director of the Spanish race.

The cycling event was supposed to begin on August 14 with a tour around Utrecht, followed by a stage taking cyclists to Den Bosch. The third day was to be a stage through Noord-Brabant, beginning and ending in Breda.

But the plan went up in the air when cycling's governing body UCI put La Vuelta on hold, like the Tour de France and the Giro d'Italia. The expectation is that that the Spanish race will be held in October or November, but no new date has been confirmed to La Vuelta Holanda.

“There are a lot of factors with this. Which other events are scheduled at the time, How much of the Police force can be used. And, because La Vuelta is a race on a public road, it is important to find out which infrastructural works are ongoing at the time”. La Vuelta Holanda organizer Martijn van Hulsteijn told NL Times.

Van Hulsteijn said there certainly is a possibility that the race will not even start in the Netherlands if it takes place at all. “That is a matter for the Dutch and Spanish authorities, and we will follow their guidance. We are hoping to start the race here but we understand that this could be difficult. The Spanish organization are impressed at how we have organized the event, and are very much hoping it can be done.”

If the Netherlands is cut out of the event, or if it can't organize the infrastructure needed to make the race happen this year, then the Dutch team said it will set its sights on 2022. That's the preference of Utrecht Marketing director Cor Jansen, who thinks all major 2020 public events should be scratched off the calendar.

In 2022, he said, Utrecht will celebrate its 900th anniversary as a city, making it a better option than jamming La Vuelta into a year heavily affected by an ongoing public health crisis.

"Then, together with the provinces of Brabant and Utrecht and the cities of Den Bosch and Breda, we will make it a beautifully accessible, sunny and relaxed cycling party," Jansen told RTV Utrecht last week.

The next edition of La Vuelta will be the 75th time the race has been held. The race was held ten times from 1935 through 1955. It has been held annually every year since.

Hague-born cyclist Joop Zoetemelk is the only Dutch person to have won the race, which he accomplished in 1979. He won the Tour de France the following year.