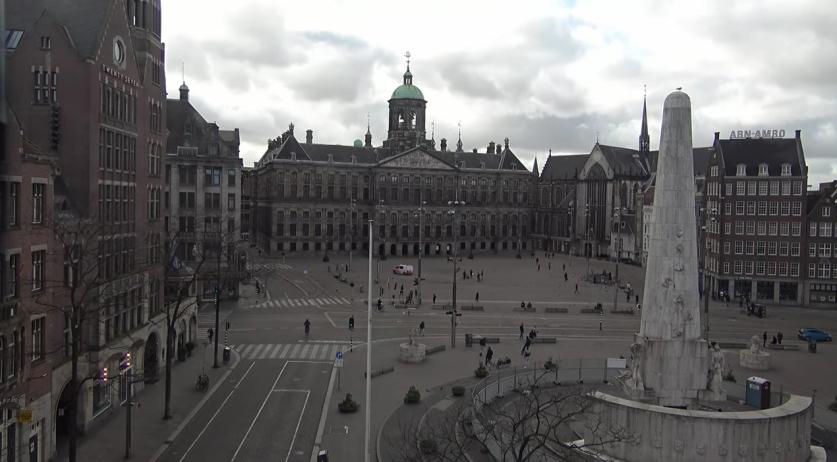 Beaches, streets and public areas across the Netherlands stood largely quiet on Saturday as the public continued to adhere to the new rule that requires 1.5 meters distance to be kept between people. The quietude comes in spite of the fair weather forecasts for the weekend which similarly drew large crowds to gather a week ago even after government and health officials pleaded with them to remain home as much as possible to help quell the coronavirus pandemic.

Large beaches such as Scheveningen, Zandvoort, Bloemendaal and Noordwijk were shown to be almost empty in live videos streamed from the coast. Prominent public areas such as the Dam Square in Amsterdam remained practically deserted, as groups of three or more people were forbidden in public, with some exceptions for families and housemates. This compared to the previous weekend, where emergency services were forced to issue an NL-Alert to remind people of the health advisory.

Sunshine was forecast across the Netherlands on Saturday. A mix of sunny and cloudy weather, along with chilly temperatures, was predicted for Sunday, according to meteorological agency KNMI.

In spite of all-round public restraint, however, several incidents were reported on Saturday as small crowds gathered in various parts of the country. In the Hague, for example, large numbers of people flocked to local organic food sellers, one of which was hit with an emergency order to close due to the small crowds that it drew.

Similarly, police intervened in a gathering of 24 people, who, according to AD, had gathered in a single hotel room on the Kruiskade in Rotterdam to throw a party. Members of the group each received a fine of an undisclosed amount for not adhering to the social distancing measures put in place to curb the spread of Covid-19, as well as for allegedly consuming alcohol and drugs, and setting fire to the hotel stairwell.

The incidents come a day after the Prime Minister Mark Rutte again urged all residents to remain indoors insofar as is possible, and a week after large crowds flocked to the beaches and dunes in spite of Rutte’s previous advice that people avoid crowding.

This week, the authorities began serving fines to people across the country for unlawfully gathering.