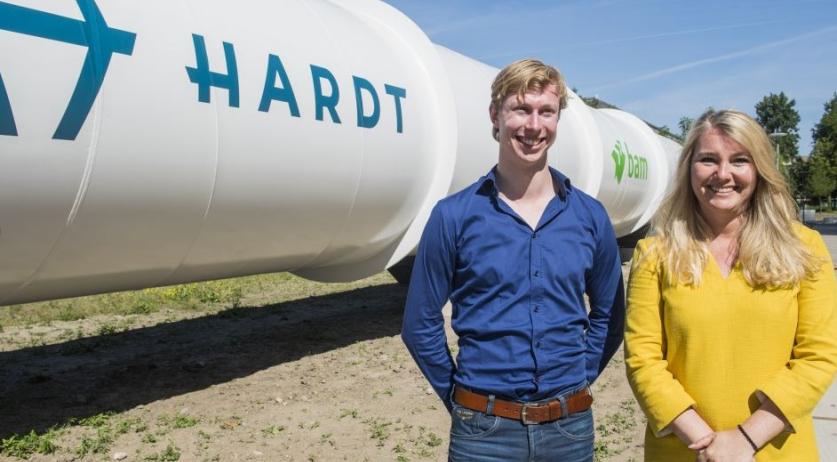 Delft hyperloop company Hardt Hyperloop received millions of euros in investments this past year and plans to use this money to build a 3 kilometer long test track in the Netherlands. The test track will be part of the company's yet-to-be-built European Hyperloop Center. If all goes according to plan, Hardt Hyperloop hopes to launch the first commercial hyperloop connection by 2025, AD reports

Over the past months, Hardt Hyperloop already tested its own technology on a 30 meter test track, the very first in Europe. "Now we want to take the next step and build a 3 kilometer test route", CEO Tim Houter said to AD. "It will become part of our new European Hyperloop Center."

The company is currently looking for a location for the European Hyperloop Center. Hardt Hyperloop currently is in talks with four provinces, including Flevoland where there is plenty of room. The availability of a strip of land that his at least 2.5 kilometers long is the main condition. Hardt Hyperloop hopes to have the deal done by early next year.

The European Hyperloop Center will also hold advantages for the province it ends up in, Houter stressed. Recent research estimates that the hyperloop market will be worth 6 billion euros in seven years' time. "Our center can prove to be the start of an economic hotspot, such as Toulouse in France for aircraft construction. That provides a lot of jobs", he said to the newspaper. He is very enthusiastic about the future of the hyperloop. "I don't have a glass ball, but the technology works. When our further test work is completed in 2022, nothing will stand in the way of commercial exploitation."

If all goes according to plan, the first real hyperloop connection will launch in 2025. This will be a short route, about 50 kilometers from an airport to a city center for example, and primarily for goods transport. "That's how people will get used to it", Houter said. He thinks people will be willing to get into a sealed capsule and be transported through a tube at speeds up to 100 kilometers per hour. "Provided that we furnish it comfortably with, for example, large screens on the side."

Houter believes that the hyperloop is the transport method of the future. "The hyperloop is completely emission-free and faster than aircraft." It is cheaper to build than a high-speed train line, and also requires less space, he said.