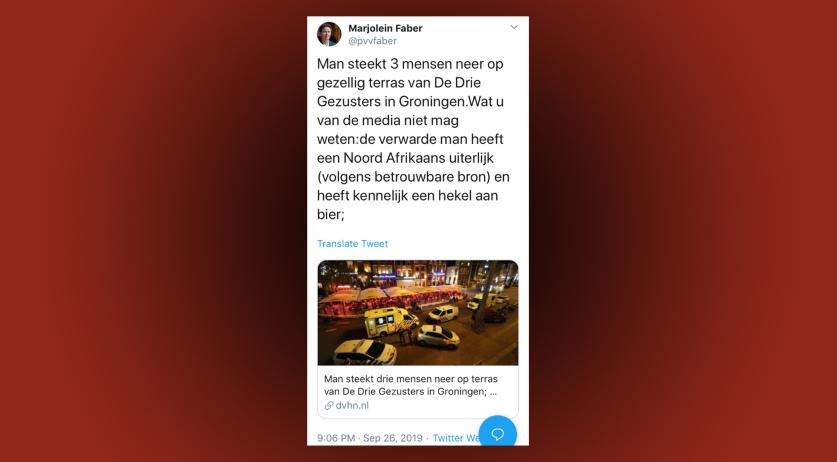 PVV Senator Marjolein Faber is under fire over a tweet in which she suggested that the media deliberately withheld the "North African" ethnicity of a man suspected of stabbing three people at a Groningen terrace last week. Days after two of the three victims refuted this claim, describing the suspect as having pale skin and gray hair, the populist politician's tweet is still online.

The stabbing happened at terrace De Drie Gezusters on Grote Markt in Groningen last week Wednesday. Three people - a student, his friend, and a young woman - sustained minor injuries. The suspected perpetrator fled the scene, but was later arrested. The weapon used in the stabbing was seized during the arrest. The victims were treated at the scene and in hospital. They are shaken, but doing well under the circumstances, AD reports.

After the incident, the police only said that the perpetrator is 67-years-old and lives in Groningen. The police also called him "disturbed".

The day after the stabbing, Faber tweeted, translated from Dutch: "Man stabs 3 people on the cozy terrace of De Drie Gezusters in Groningen. What you are not allowed to know from the media: the disturbed man has a North African appearance (according to a reliable source) and apparently hates beer." Her tweet included a link to a Dagblad van het Noorden report on the incident.

Two of the three victims subsequently told Dagblad van het Noorden that they would not describe the perpetrator as having a North African appearance. Bert Kaykanat, the student injured in the stabbing, did not get a very good look at the perpetrator, but remembers him looking quite old with gray hair and pale skin. "He certainly wasn't tanned. But it went so fast, I was not able to see him completely", he said to the newspaper.

His friend Anne Clerc got a better look at the suspect and also mentions his gray hair. "And he had a fairly large nose, a pointed nose. I have no idea what his origin is, but his skin is white in any case. I never said that he would be North African, and I have no idea who [Faber's] information could come from."

Due to privacy, the Public Prosecution Service and police could not tell AD anything about the suspect's origin. The police did say that he was remanded into custody for 14 days.

After Faber's tweet and the witnesses' refute, people on social media accused Faber of fear mongering, hate speech and distributing fake news. She was asked multiple times to remove the tweet, according to AD. But as of 11:00 a.m. on Monday, September 30th, it is still online.

Faber claims that her source is the woman who was injured in the stabbing, AD reports. "She is known to me and I heard it through her. Not directly, by the way, but through a relative of her's", the PVV Senator said, according to the newspaper. "I absolutely believe that my information is correct. Otherwise I would never have put it on Twitter, I have to know for sure."