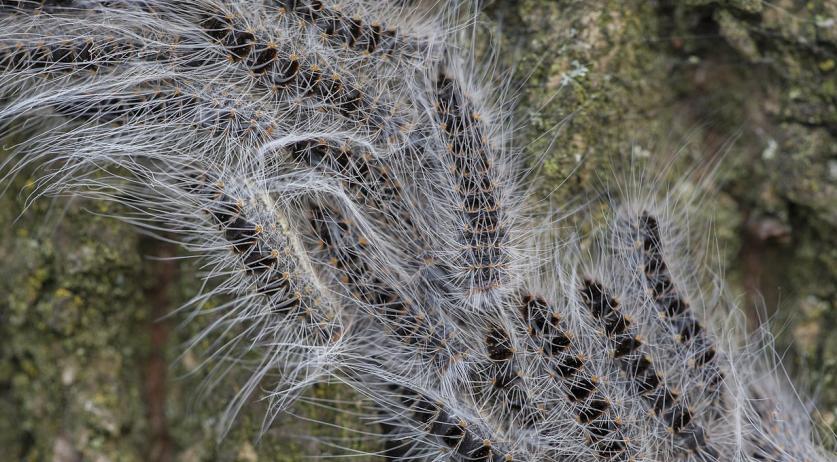 This weekend will be another hot and sunny one in the Netherlands, with temperatures up to 33 degrees expected on Saturday and up to 32 degrees on Sunday. But a plague of poisonous caterpillars throughout the country is putting somewhat of a damper on the outdoor fun.

The oak processionary caterpillars get their name from their preference for oak trees and the fact that they travel in nose-to-tail processions. Their venomous hairs can cause skin irritation and breathing problems in humans. This year between 60 thousand and 100 thousand people in the Netherlands will have problems with these caterpillars, the Dutch Association of Medical Environmental Sciences estimates based on the number of complaints municipalities all over the country received over the past weeks, NU.nl reports.

That puts the current plague at the same level of 1996 and 1997, when the Netherlands first became aware of the problems this type of caterpillar can cause. Experts have been warning for years that these caterpillars will have increasingly major consequences. Partly due to the warmer weather, the number of caterpillars is increasing every year. This summer there are at least three times as many as in previous years.

Minister Carola Schouten of Agriculture, Nature and Food Quality announced on Thursday that the knowledge and advice center for animal pests KAD will henceforth the national coordination center in the fight against the oak processionary caterpillar. It is high time that the approach against this caterpillar type is coordinated, KAD director Bastiaan Meerburg said to NU.n. "Better late than never." It's already too late to do anything significant against the caterpillar this year, so KAD will mainly focus on prevention for next year, he said.

The hot weather itself is also turning out to be a bit of a bummer this weekend. A number of events were canceled due to the high temperatures. The organizers want to prevent problems, NOS reports.

The Euregionaal Football Tournament for refugees in Neede is canceled. The organization considers it irresponsible to play on artificial turf at these high temperatures and is now looking for a different date. "A difficult decision, but we believe the right one", organizer Sportfederatie Berkelland said.

The Midsummer Marathon in Apeldoorn is also canceled. "You just don't run in temperatures above 30 degrees", organizer Theo van Maanen said to Omroep Gelderland. Everyone who is registered for this year can participate for free next year. The Liemers Posbank run, a horse festival in Veldhoven, a sheep shearers festival in Nijkerk, and the Duiven walking tour have all also been canceled.

Other events are taking measures against the heat. A number of music festivals are making sure there are enough drinking water points and shaded areas, and are allowing attendees to bring empty water bottles with them to fill up for free. The fair in Doesburg will have a larger First Aid post and a water point. Veterans Day in The Hague is also taking measures. "We are arranging thousands of straw hats so that we can had them out", spokesperson Koos Sol of the Dutch Veterans Day Foundation said to Omroep West.

The participants in the Samenloop voor Hoop in Helmond are advised to relieve each other more often. The runners in this event are raising money for the fight against cancer. A large volleyball tournament in Heeze will only start late in the afternoon, when things are cooling down a bit. In order to complete the entire programed schedule, the tournament is starting a day early.

Animal groups are also reminding Dutch to take extra care of their pets during the hot weather. Make sure your animals have enough drinking water and shaded areas to cool down in. And never leave your pet in a car.  "Not even in shade, not even with the window cracked open, and not even for a short while!" the Dierenambulance Amsterdam team said.