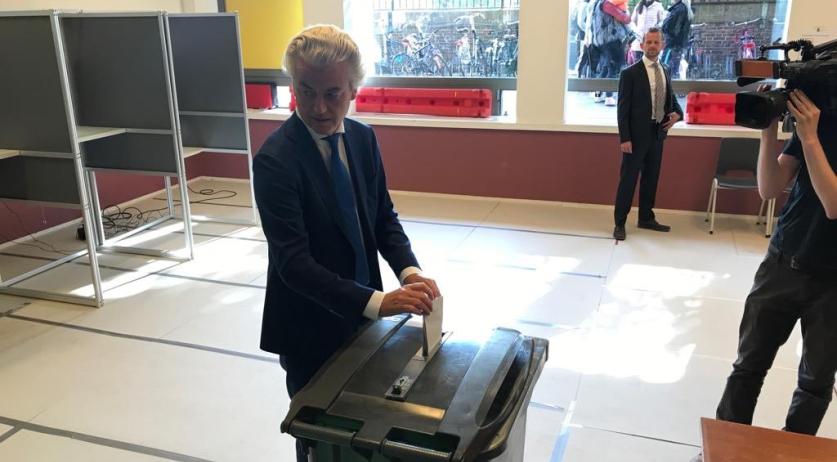 PVV leader Geert Wilders is disappointed by the exit polls results for the European Parliament elections. His anti-EU party received 4.1 percent of the votes, compared to 13.3 percent in the previous European elections. That means that his PVV will lose three of its four seats.

"Unfortunately the PVV has lost seats. We had hoped for more seats, but with our seat in the European Parliament we will fight even more with our European friends against the EU monster, Islam and mass immigration!" Wilders said on Twitter.

The other party leaders are satisfied. According to the exit polls, the PvdA is the Netherlands' big winner in this election, going from three to five seats in the European Parliament. The VVD and CDA each get four, meaning that the CDA lost one seat and the VVD gained one. Populist party FvD also won big, going from zero seats to three.

"I want to thank everyone who voted for the PvdA today for their confidence", party leader in Europe Frans Timmermans said to NOS in a first reaction. When asked whether the PvdA will merge with other left-wing parties, he said: "You know that I am a strong believer in left-wing cooperation. If you see how much the GroenLinks and PvdA programs look alike, it would be strange if we stop working together." PvdA leader Lodewijk Asscher said on Twitter: "So proud. Of Frans Timmermans. Of all PvdA member in the Netherlands. So grateful. For the confidence of so many people."

VVD leader for the European Parliament Malik Azmani spoke of a "good result" for the liberals. "We have a profit and that's what matters to me", he said to RTL Nieuws. Azmani congratulated the PvdA with its surprise win. VVD leader Mark Rutte is pleased that Dutch voters at least expressed a clear preference for parties who want the Netherlands to stay in the European Union. The Prime Minister said that he did not see the PvdA victory coming. He congratulated Timmermans with "an incredible achievement".

European leader for FvD Derk Jan Eppink is satisfied with the result his party achieved in the exit polls. "We are the biggest winner in the number of seats, we are going from zero to three. That is a good result", he said to NOS. Eppink called the PvdA's win "surprising". According to him, the PvdA can thank Timmermans for this. "I congratulate him on this victory", Eppink said.

The CDA lost one seat, according to the exit polls, but European leader Esther de Lange is satisfied. "The flanks have not won and that is a important signal to Europe", she said to NOS. The victory of the "constructive middle parties is of great importance in Europe to find solutions for the Netherlands", De Lange added.

As other EU Member States are only voting over the weekend, the actual results for the European elections will only be available on Sunday night or Monday morning. Only the voting public in the Netherlands and the United Kingdom hit the polls for the election on Thursday.