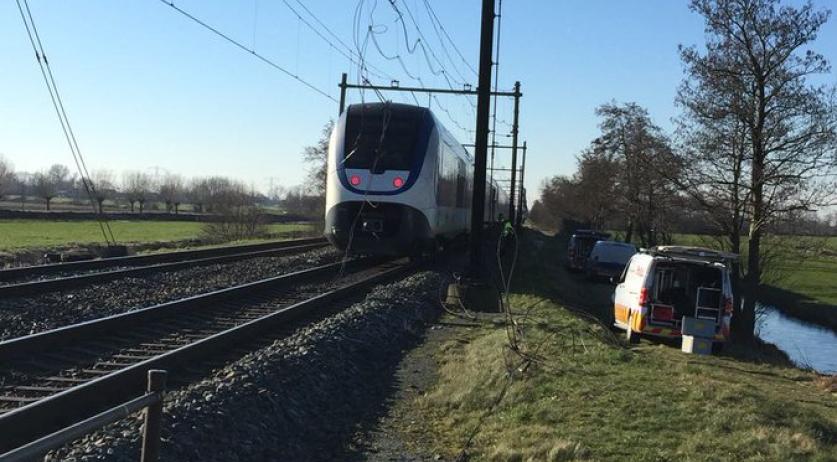 A few hundred train passengers spent over five hours stuck on a train between Woerden and Gouda on Wednesday. The train came to a stop when the overhead line suddenly broke, part of it landing on the front of the train. The train lost power, and the passengers were left stranded with nothing to eat or drink, NU.nl reports.

Because the train lost power, the heating wasn't working and travelers couldn't use the bathroom. It took over four hours for another train to arrive at the scene and tow the stranded train to Gouda station, according to NOS. Two other trains also came to a standstill in the middle of the polder, halting train traffic on the route for a large part of the day.

"Around 8:30 a.m. our train suddenly stopped", one of the passengers told NU.nl from the train on Wednesday morning. "Because the power went out, the intercom and toilet do not work. People are trying to get cars to the polder because we are close to a farm road. But because the power doesn't work, we can't leave the train."

Another stranded passenger was Utrecht city councilor Bert-Jan Brussaard. He spent 5 and a half hours on that train, he said to RTV Utrecht. "We did not have any food, no water, and the toilet could not be flushed", the councilor said. According to him, the train staff did their best, but it wasn't really enough. "They also received very little information. It would have been nice if there had been something to eat and something to drink. I hope I never experience this again."

ProRail called this an exceptional situation. "Our guideline is a maximum of two hours. The fact that the passengers were stuck for so long is very annoying", a spokesperson said to NU.nl. "We apologize for this." The evacuation took longer than usual because this is a difficult route, the spokesperson said. The fact that several trains were stuck on the same route, and that some 150 meters of overhead line was damaged, also added to the evacuation time.