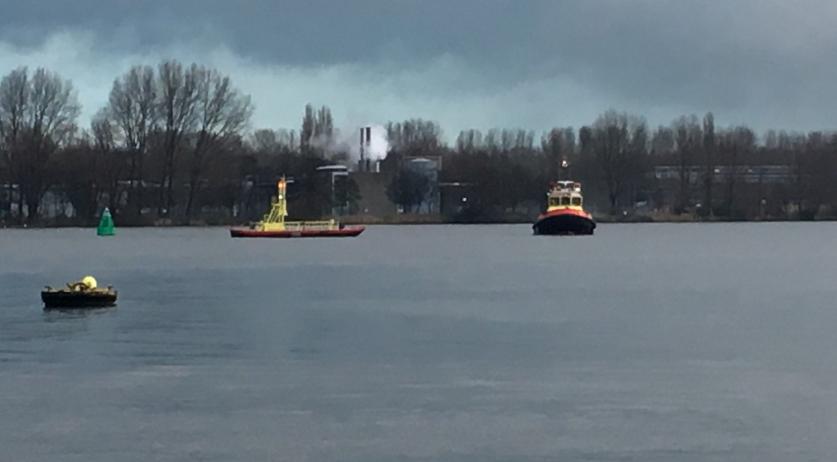 Port of Amsterdam boats responding to an area on the IJ where a WWII sea mine was found, 1 Feb 2018 - Source: Photo: Zachary Newmark / NL Times at
Ij
Amsterdam
Java island
sea mine
WWII
WWII bomb
Azartplein
Defense
police
Share this:

WWII sea mine found in IJ in Amsterdam

A sea mine was found during dredging work in the IJ in Amsterdam, near Java Island on Wednesday evening. The police believe the explosive dates from World War II. An explosives clearance team from Defense dived to the bomb late on Wednesday night and will re-enter the water this morning. There is no immediate danger to the surrounding area, according to the police.

Dredgers picked up the mine on the north side of the island during work on Wednesday, according to Hart van Nederland. After pictures were taken of the explosive, and it was identified as a possible sea mine, it was carefully placed back down, and explosive experts from Defense were called in. They dived down to the bomb late on Wednesday night to determine whether it needs to be removed immediately or can be left until daylight.

A spokesperson for the explosive clearance service told local broadcaster AT5 late on Wednesday night that they were still looking for the explosive. "We are now working on locating the suspected sea mine to determine whether it really is such an explosive. The Germans placed a number of them in the Second World War, it could be one." Eyewitnesses told the broadcaster on Thursday morning that it hasn't been found yet.

As a precaution, the police closed down the quay at Azartplein and halted the ferry between the square and Zamenhofstraat for a time, the Telegraaf reports. "We do not want prying eyes, but the mine is 270 meters off the side, so there is no danger for local residents", a spokesperson for the police said to the Telegraaf at on Wednesday night. The closed off areas were released later in the night.

On Thursday morning the area where the mine was found was marked off with buoys. The ferry between Azartplein and Zamenhofstraat was operating, but on a modified route marked by buoys.