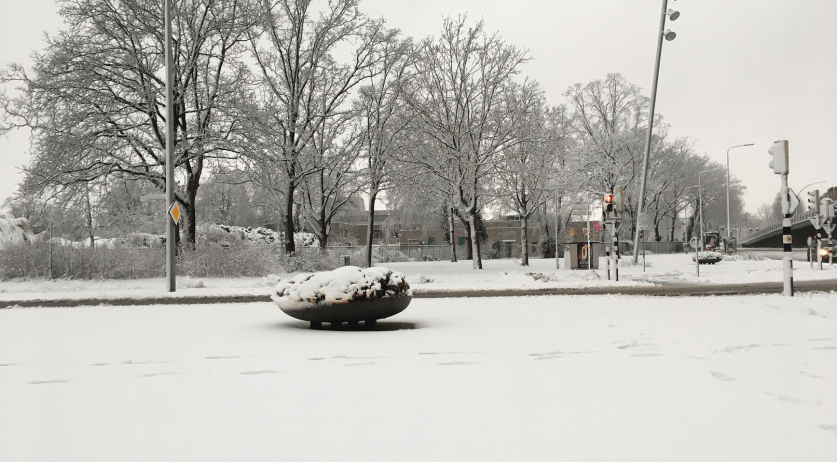 The Netherlands was blanketed in snow over the weekend and more snow is expected this afternoon. Meteorological institute KMNI issued a code orange weather warning of extremely dangerous weather. And the Rijkswaterstaat warns people to rather work from home today if possible.

A code yellow weather warning is currently in effect for the entire country. Motorists are warned to to be careful of icy and slippery roads.

More snowfall is expected during the course of the day. From noon a code orange weather warning is in effect, starting in Limburg, Noord-Brabant, and Zeeland, and moving through the country until it takes effect in the northern provinces from 5:00 p.m. "Risk of slipperiness. Major risks for road users. Adjust your driving and travel behavior. Take longer travel times into account on the road and in public transport. Follow weather reports and warnings", the KMNI warns.

The ANWB expects a busy morning rush hour, and an extremely busy rush hour this evening, NU.nl reports. By 6:30 a.m. on Monday there was already over 90 kilometers of traffic jams on Dutch roads. Major delays are expected, especially on the A2, the A7 and the A27. On Sunday the weather caused around 150 traffic accidents, not including minor skidding accidents, according to Rijkswaterstaat. The Dutch public works department deployed all available personnel and material to keep the roads as accessible as possible on Monday.

Like Sunday, NS will run fewer trains on Monday due to the weather conditions. In most places in the Netherlands there will be a train every 30 minutes, instead of every 15 or 10 minutes.

KLM canceled 122 flights, starting at 3:30 p.m. on Monday. This mostly involves flights to European destinations, a spokesperson said to NU.nl. Schiphol expects lower runway capacity due to the snow.

Our snowfleet is working hard to clear the runways as well as possible. pic.twitter.com/E2GUyDkFDQ