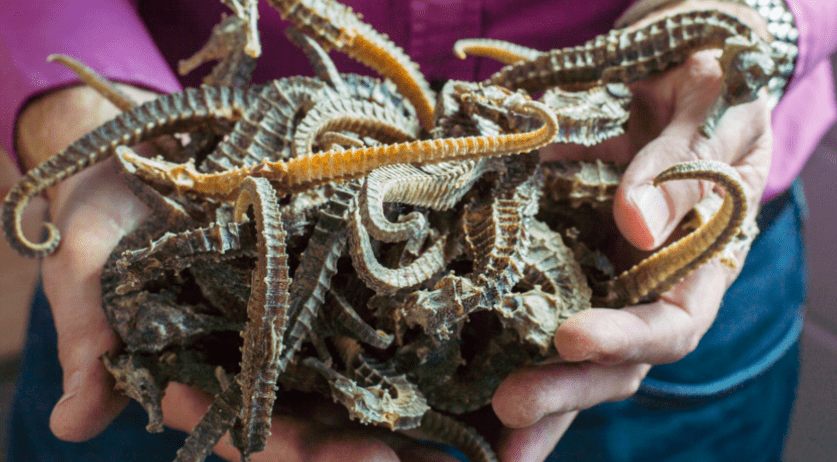 In a massive action against the illegal trade in animals and plants, the Dutch government seized a huge amount of illegal products over the past months. Among the items seized were 14 thousand dead seahorses, three elephant legs, a polar bear skin, and 77 kilos of scales from the very endangered African ant eater, the Ministry of Agriculture, Nature and Food Quality announced.

Between September 1st and November 5th, the Ministry seized a total of 59 different animal and plant products at Schiphol, the port of Rotterdam and in the Caribbean Netherlands. In addition to those named above, the ministry also seized orchids, items made from protected wood species, 40 kilos of snake wood powder, a number of live birds, 120 arapai fish, ape skulls, crocodile skulls, seven animal skins, ten shipments of live coral, the shell of a green sea turtle, and six butterflies.

A number of suspects were arrested, and some of them have already been sentenced, according to RTL Nieuws. The person caught with 14 thousand dead seahorses at Schiphol was sentenced to six months in prison, three of which conditionally suspended. Traders caught at a bird fair in Zwolle, who were trying to sell birds with incorrect leg rings or without the right papers, were fined 5 thousand euros.

This action stems from an international treaty promising to prevent the illegal trade of animals, plants and related products. In the coming years the Dutch police, customs and the various Inspectorates will continue to monitor for these items. Special actions to inform the public about the damages caused by this trade will also be held.