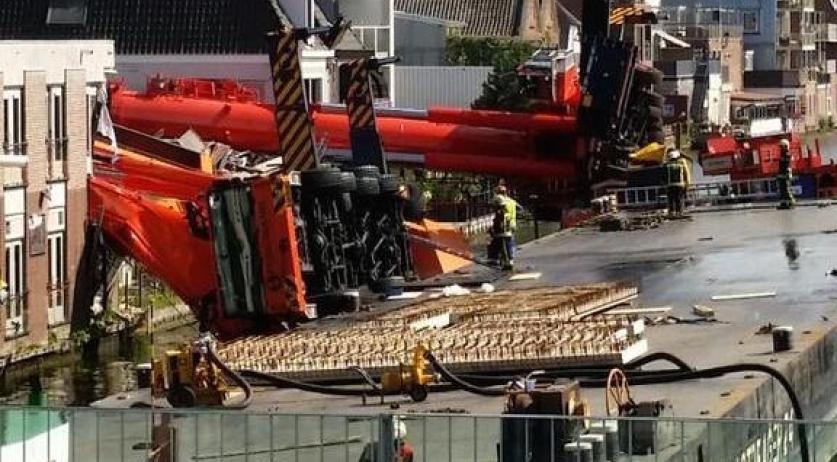 Entrepreneurs who were affected when two cranes collapsed while trying to place a new deck on the Juliana Bridge in Alphen aan den Rijn in August 2015, are demanding compensation from the municipality and contractors involved, a spokesperson for the Alphen municipality confirmed to NU.nl on Thursday.

The group of business owners on Hoofstraat hired damages attorney Orlando Kadir, who summoned the municipality and four involved contractors to acknowledge liability. If they do not do so, the entrepreneurs will go to court, he said in a letter sent to the involved parties this week.

The cranes collapsed onto houses and shops on Hoofstraat while trying to place a new deck on the Juliana Bridge on August 3rd, 2015. No one was injured, but a lot of damage was done. The Dutch Safety Board investigated the incident and concluded that the municipality and contractors are responsible for errors in preparation that caused the incident.

The cleanup took three months, during which the shops on Hoofstraat had to remain closed. According to the shop owners involved, this led to "dramatic" loss of income. Several of the business owners now face major financial problems. Four companies already went bankrupt, Kadir said.

The letter sent to the municipality this week was written on behalf of three entrepreneurs. According to them, they suffered the most problems from the incident. The three want between two and three million euros in compensation. Should a court rule in their favor, Kadir will file a similar case on behalf of the 30 other entrepreneurs affected. Their damage claims will amount to tens of thousands of euros apiece.

According to the lawyer, the entrepreneurs are only now demanding damages because they hoped that long ongoing settlement negotiations will prove to cover their damages. "We had long hoped that the emergency fund would offer release. But the municipality and insurers put in every effort to pay no money", he said to NU.nl.

"We have absolutely no interest in a lawsuit; that would likely take months, and most of the victims don't have that time. But the municipality left us no choice." Kadir said.