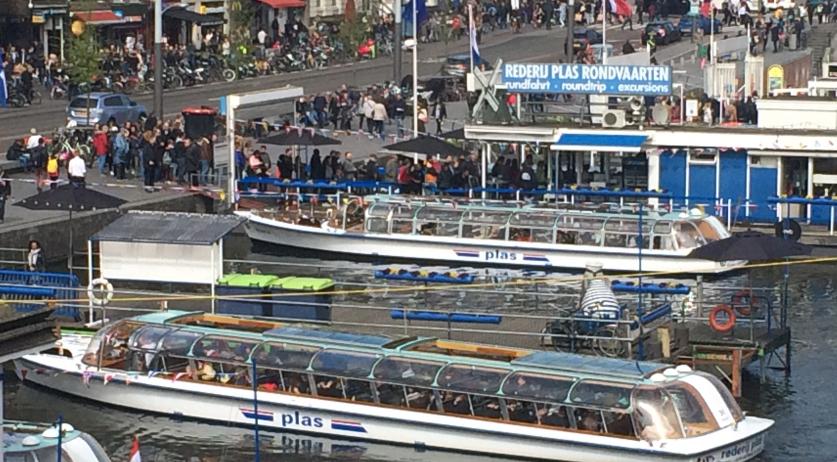 Thousands of tourists descend on Amsterdam centrum for Easter

With Airbnb locations booked solid and hotels filled to capacity, Amsterdam city hall has authorized the use of a police traffic management plan normally rolled out exclusively for massive events. A constant stream of tourists dragging suitcases behind them could be seen all Friday morning and afternoon, while restaurants, shops and attractions in Leidseplein, Dam Square, the Red Light District and the Nieuwmarkt were bursting at the seams.

About a million foreign tourists were expected to travel to the Netherlands for the long holiday weekend, and their presence was felt throughout the Amsterdam city center. In preparation for this, the city announced a plan to create a route with traffic wardens playing the role of hosts to help guide tourists around the center. Several dozen police officers will also patrol a beat in city center, while residents will be able to call the city's 14-020 phone hotline at any time through Monday to report nuisance or excess garbage.

The measures were necessary even as the city could not determine how many tourists from the Netherlands and abroad were planning to spend time in the capital, Alderman Pieter Litjens told the Telegraaf. "The measures are concerned with a balanced distribution of visitors over the Wallen district, and preventing reverse flows on busy side streets during busy periods," the city stated in a release. The Wallen typically refers to the area bordered by Central Station and Muntplein at the north and south ends, and from Damrak on the west to Geldersekade at the east.

Additionally, Amsterdam Marketing, which handles some aspects of communication for the city, is constantly updating a website to provide current waiting times for the city's major museums. The organization called it the first of its kind in the world when announcing it on Twitter earlier on Friday.