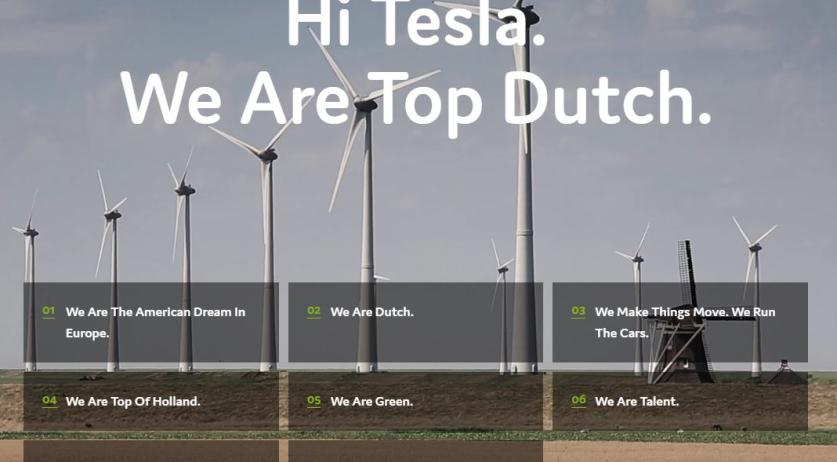 Drenthe, Friesland and Groningen launched a global campaign to bring a massive Tesla factory to north Netherlands. "Hi Tesla. We are Top Dutch", the website launched with the campaign reads.

The website lists many reasons why north Netherlands is the ideal place for the Tesla factory, with photos and footage of the region showing windmills, dolmens, full lecture halls, robots and Nobel prize winner Feringa. In the coming period Tesla employees in Silicon Valley and Dutch politicians will also be bombarded with messages explaining why electric car giant Tesla belongs in northern Netherlands.

The slogan of the campaign is "Let's bring the electric car home", with which the campaigners are referring to the precursor of the electic car that was developed in Groningen in the 19th century, according to NOS.

The northern provinces believe they stand a good chance in getting the Tesla factory, believing themselves to be in the Top 10 of European sites for the factory. There is however some competition even from within the Netherlands. Tilburg already has a Tesla factory. And Noord-Brabant is also hoping that the electric car manufacturer opts for Brabant.

The campaign launched on the same day that Minister Henk Kamp of Economic Affairs visited Tesla in San Francisco. The Minister told NOS that he finds it important that the region develops and that he will not stand in the way of that enthusiasm. "But I have my own responsibility and must make sure that I act in the Dutch interest. The others have regional interests, which they do in their own way and I respect that." he said to the broadcaster.