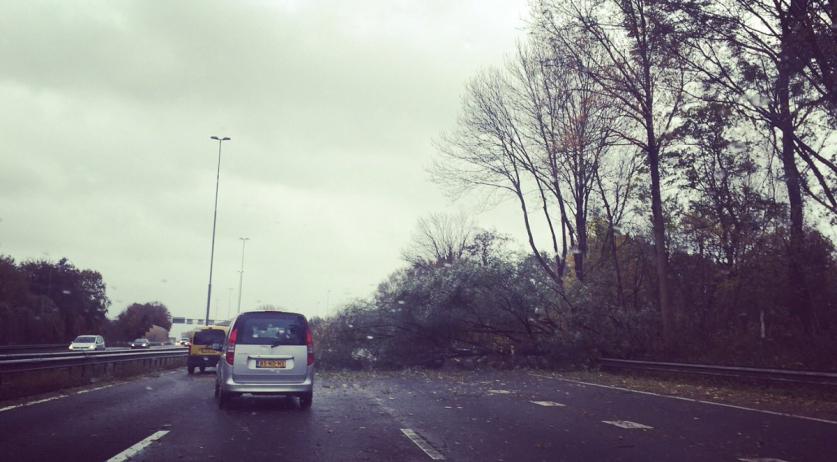 The Netherlands had its first autumn storm of the season on Sunday. Five people were injured in Arnhem when deck screens were blown over and hit them. And reports of damage came in from accross the country, NOS reports.

Most of the problemswere caused by strong gusts of wind. Wind strength along the coast was measured at 9 and inland the gusts reached speeds of up to 100 km per hour. In Noord-Holland during the afternoon wind strength 10 was measued and in IJmuiden there were gusts of 134 km per hour, according to Weeronline. Four of the injured people - pedestrians, including families with chilcren, walking along a terrace near the Arnhem train station - were hospitalized. Their current condition is unclear.

The storm first hit Zeeland on Sunday morning. The Zeeland fire department started receiving reports of fallen trees and  other damage around 10:45 a.m. A container ship was set adrift off the coast of Schouwen-Duiveland. The ship lost an anchor and had problems with its engine after a collision with anoter hsip. It was steered back to the nearest port around 2:45 p.m.

During the afternoon the storm moved further along the Noordzee coast. There were many reports of fallen trees and damage to cars and rooftops from Zuid-Holland.

Fire departments across the country received reports of damage. The police were so busy dealing with storm reports that they asked the public to only call emergency line 112 in life threatening situations. The authorities were very busy cleaning up the Dutch highways on Sunday afternoon and evening. Fallen trees, blown down road sings and lamposts had to be cleared away.

The stormy weather also led to the NK Tegenwindfietsen bike race in Oosterschelde to be cancelled. And no ferries were traveling to Texel until late afternoon.