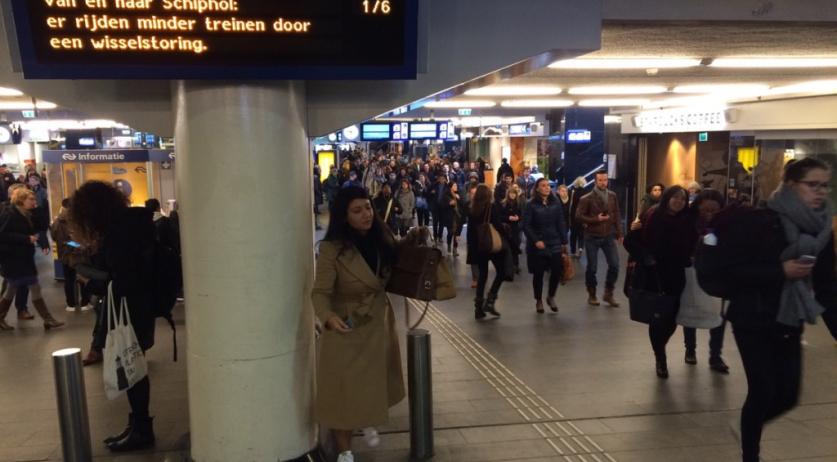 Most trains between the Netherlands and Belgium were cancelled by national Dutch railway NS on Tuesday morning after train stations in and around Brussels were closed by authorities, the NS stated. The decisions were made after three separate suicide bombings were carried out at the Zaventem airport and the Maalbeek metro station in Brussels. Along with NS Intercity trains, rail service operated by Eurostar and Thalys was also cancelled. About 20 passengers were gathered on track 15A at Amsterdam Centraal, waiting to board the 9:52 a.m. NS Intercity service to Brussels. Several of them had not heard of the attacks before, but vowed to press on with their journeys. Justin and Katie, two North American tourists set to board the Intercity train with Starbucks cups in hand, said that the attacks certainly gave them pause. “I’m a bit more concerned now,” Katie said to the NL Times upon hearing of the bombings. When asked if they would consider getting off the train earlier then planned, the two looked at each other and said, “No.” Their train pulled away from the Amsterdam station on time, but the NS announced its decision to cancel trains at about 10:30 a.m. Trains that were already en route to Belgium, including Justin and Katie’s train, will be halted on the Netherlands side of the Dutch-Belgian border. The only exception are trains which stop at every station between Rosendaal, Noord-Brabant and Antwerp, Belgium. However, the NS recommends passengers frequently check its website for the most current information, or call +31 (0)30.230.0023. Passengers on NS Intercity trains are allowed to rebook their March 22 or 23 travel to a train departing by March 28 at no cost, or cancel the journey altogether for a full refund. Changes rescheduled for after March 28 could incur a charge if the fare is different from the original booking. The Thalys policy is similar. Eurostar passengers may rebook their tickets scheduled for March 22 at no charge free within 60 days. TGV train bookings for Tuesday trains may also be cancelled or rebooked at no cost, but the transit firm is not certain what their schedule will be for the remainder of the week.