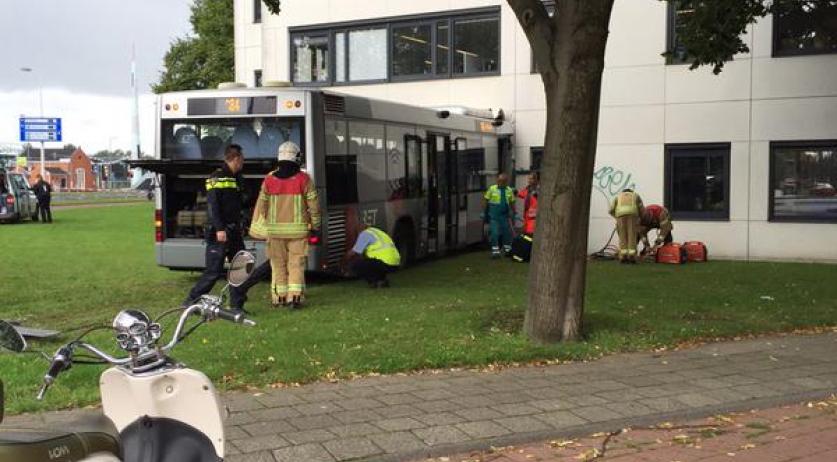 A public bus crashed into an office building at the intersection of Vaanweg and Strevelsweg in Rotterdam on Tuesday morning. Twelve people were injured. It seems that the bus driver lost control of the bus after falling ill. "Someone shouted: 'she is unwell, the driver is unwell!' And at that moment the bus started driving faster", one passenger said to RTV Rijnmond. The accident involved a RET bus on the 143 bus line from Dordrecht to Zuidplein. The bus hit a pole and finally crashed into the SAA Verzekeringen office building. According to information- and warning system Rijnmondveilig, the driver was trapped in the bus after the accident and had to be cut free by the fire department. She was taken to the Erasmus hospital in unknown condition. Two of the other injured passengers were taken to the nearby Ikazia Hospital, AD reports. The rest of them were treated at the scene. The intersection has been almost completely closed off to traffic. "She drove straight instead of taking the corner", passenger Coby Koks, who was sitting near the driver, said to AD. "She sat askew in her chair and I saw that she was not well." "It was complete chaos in the bus", another passenger, who was traveling with two friends, said to RTV Rijnmond. "We are young. But there were also older people. They were immediately in shock. We were also sitting towards the front of the bus. We saw it all happen and were able to brace ourselves. If you are at the back of the bus, you have less visibility." Employees in the office building also got quite a fright. "I was working on the fourth floor and suddenly heard a huge build. The building was shaking", Ida Bishop said to the AD. The building has been evacuated as a precaution.