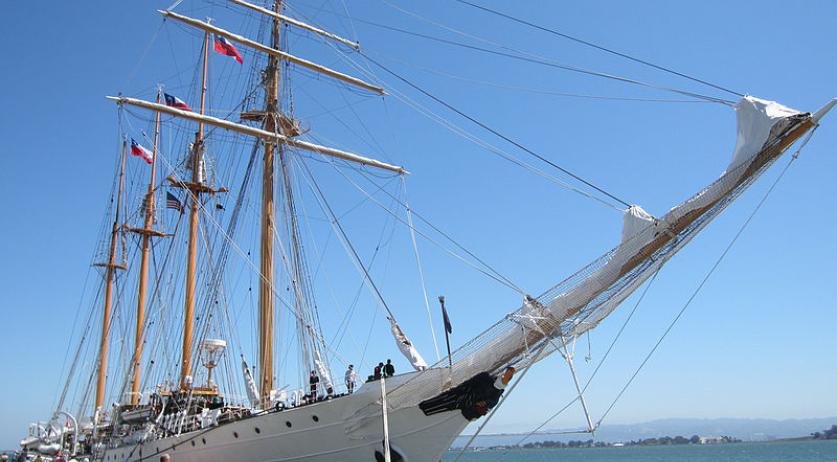 A number of Chileans in the Netherlands as well as the PvdA in Amsterdam are upset by plans to host a banquet on the Chilean navy ship Esmeralda during Sail Amsterdam. In the 70's the Esmeralda was used as a torture chamber for those who opposed Pinochet.  The banquet is being organized by the Chilean Embassy, Het Parool reports. It is "in honor of Amsterdam, a city that inspires democracy and freedom", according to the embassy. Invitees include Dutch politicians, diplomats, representatives from the cultural sector, entrepreneurs and Chileans living in the Netherlands. But many find the ship's dark history an inappropriate setting for strengthening diplomatic ties. Many people were tortured on the Esmeralda in 1973, shortly after the coup of army chief Augusto Pinochet. In 1976 Chilean lawyer Luis Vega Contreras gave a 14 page account to US officials about what he and other people had to endure on the ship. "They put the barrel of a gun against my head and one foot in my back while they shouted, beat and insulted me." his statement reads according to the newspaper. "The fear, the screams, the cries of the women who were imprisoned alongside us can not be expressed in this statement." This is the first time that the Chilean navy ship will be included in Sail Amsterdam. According to Jan Driessen, spokesperson for Sail, it was a conscious choice to welcome the controversial ship. "We must learn from our past", he said to the newspaper. There will be no mention of the ship's history of torture. "We just look at the nautical history of the ship." The Amsterdam PvdA is uncomfortable with the lack of information about the Esmeralda's history. "We can not blithely drink champagne without recognition for the history of the ship." faction leader Marjolein Moorman said. "It may be an aesthetically beautiful boat, that does not mean that it is ethically acceptable." A number of Dutch-Chileans are also uncomfortable with the idea. Rafeal Railaf of the Dutch-Chilean organization Mapuche thinks that the banquet is very inappropriate. "The ship is beautifully painted white, but underneath is the blood of the prisoners", he said to Het Parool. "We are not against the arrival of the ship. The younger Chileans in the Netherlands feel the history less strongly, they would rather forget. But the Esmeralda has a tainted past. We want to remember the victims at least." "It is a scandal that the torture ship is being used to bring Chileans and Dutch together", said Robinso Alarcon, who was forced to flee Chile in 1973. "If Dutch delegates actually go to the banquet, the embassy's attempt to make us forget what happened on board will succeed."