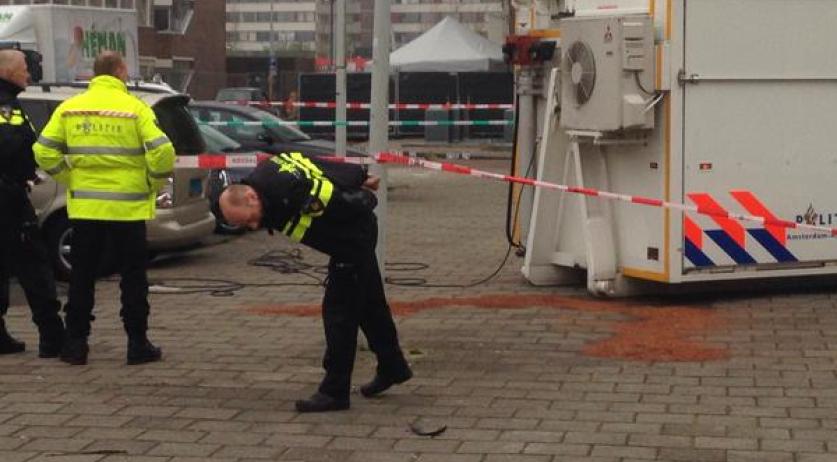 Update: An earlier version of this story quoted police saying they were looking for a dark-colored Volkswagen Golf. Police retracted this statement at 2 p.m. on April 26, 2015. A brazen early morning shooting left one man dead overnight in the Amsterdam neighborhood Osdorp Oost. The victim was sitting in a car on the S.F. van Ossstraat, when an unknown number of assailants opened fire, police said Sunday. Netherlands-born underworld figure Baris Önder, 26, was killed in the attack, his Jillis Roelse confirmed to ANP. The Amsterdammer's father, Atilla, is also known in criminal circles in Turkey and the Netherlands. "The car was riddled with bullets, mortally wounding the driver," police wrote in a report. The victim's car then struck several parked cars before coming to a halt. Investigators are looking for a silver BMW or Mercedes possibly used as a getaway car, police said. A witness contacted the NL Times saying the assailant fled in a silver BMW 5-series. The shooting happened just after 3 a.m. on Sunday. Police sealed off the area to collect evidence and conduct an investigation throughout much of the morning. They are asking all witnesses to contact them immediately. Murat Garki, the younger Önder’s partner-in-crime, was shot dead last December in Rivierenbuurt, Amsterdam. Garki, 25, and Önder were once suspects in the January assassination of Aytas Göraler, a former owner of The Sand nightclub. Atilla Önder was a one-time investor in the club, Parool reported. Neither Garki, nor either Önder was charged in the shooting. Baris Önder and Murat Garki were suspected of involvement in the abduction of and beating of a drug dealer, underground firearms sales and both heroin and synthetic drug distribution, the newspaper said. The elder Önder is in Turkey, embroiled in an investigation into several assassinations, connecting Turkey, Panama and the Netherlands, as well as the drugs trade. He was nearly killed himself in the Netherlands, but narrowly escaped.