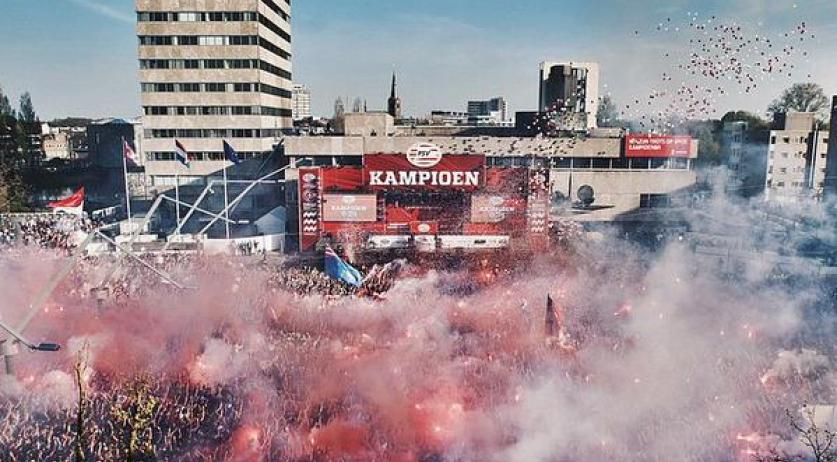 About 100 thousand people flocked to the center of Eindhoven to celebrate PSV's championship in a festive and friendly manner, NOS reports. The football players arrived on the Stadshuisplein on a flatcar. A lot of people lined the route and there were abut 30 thousand people on the Stadshuisplein itself, according to the municipality. The players and staff were honored on the steps of City Hall. Mayor Rob van Gijzel handed the championship trophy to captain Georginio Wijnaldum. According to the municipality there was only a small number of incidents. Eleven people had to go to the hospital, mostly with burns. Some attendees also became unwell in the crowds. Mayor van Gijzel called the celebration impressive. "100 thousand people in the city and hardly any incidents. That is compliment to all PSV fans that came to cheer our champions." PSV won the title champion of the Netherlands with their 4-1 victory against SC Heerenveen on Saturday. With this win PSV had a total of 79 points from 31 games and thereby dethroned Ajax, who were the champions for the past 4 years, PowNed reports. This is PSV first championship in 7 years. Luuk de Jong scored the first goal in the Phillips Stadion in the third minute of the game. Memphis Depay scored the second goal midway through the first half with a free kick, his 20th goal of the season. De Jong scored the third goal and Luciano Narsingh the fourth just before the final whistle. https://twitter.com/worldsoccershop/status/589543086524608512