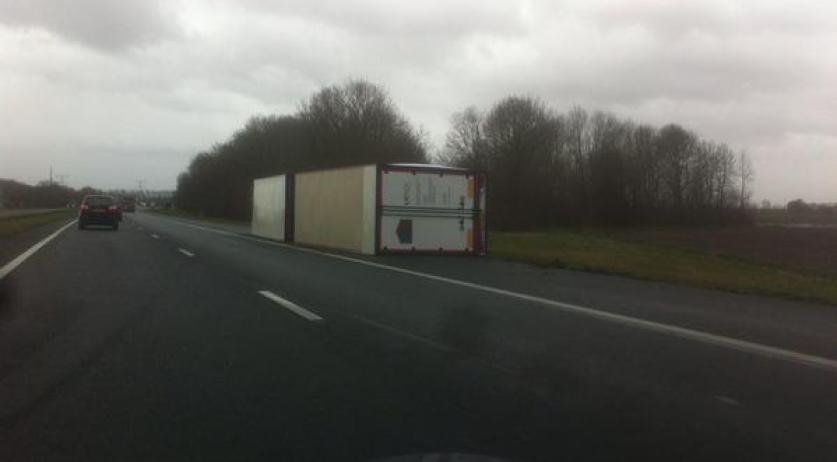 Drivers of empty or lightly-loaded trucks are advised to stay off the roads Tuesday, a message from the Dutch infrastructure agency Rijkswaterstaat states. Strong winds have knocked trucks over on several highways, especially the A50, NOS reports. Heavy winds put the country under a Code Yellow weather warning for much of Sunday, Monday and Tuesday, and a Code Orange advisory for northern provinces on Tuesday. Heavy winds up to 100 km/h are still expected on Wednesday, especially in the provinces of Noord-Holland, Zuid-Holland, Zeeland, Friesland, Flevoland and Groningen, official government meteorology agency KNMI says. The winds do not only tilt trucks, but loosen the tarpaulins on trucks and trailers, which also leads to delays. Dutch driving association ANWB reported thirteen blown over trucks over the course of Tuesday, and supports Rijkswaterstaat's advice. No serious injuries occurred as of Tuesday afternoon. The Traffic Information Service (VID) reported a total of sixteen fallen trucks and also encourages truck drivers to stay home.

"Hazardous driving conditions: empty and lightly loaded trucks are strongly discouraged to drive on the roads for the next few hours"