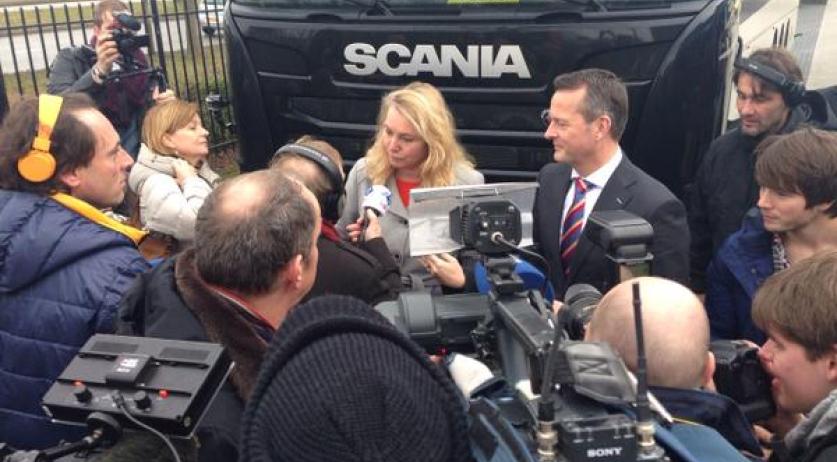 Swedish heavy truck manufacturer Scania held the first partially autonomous self-driving truck tests on Dutch public roads Monday. During the test, Scania trucks drove themselves in a convoy. The trucks departed from Scania factories and carried the test out on A28 motorway in a partnership with Transport en Logistiek Nederland (TLN). The test demonstrated linked driving, in which the lorries are within a fixed distance from each other and linked to other lorries in a way that when the first truck brakes, the others brake simultaneously. In a real world application of the technology, a truck driver would make the decision to join such a convoy on the road, and then let the truck take over. Since January it has been possible to more easily obtain permission to conduct linked driving tests with autonomous cars on public roads, and the Dutch Vehicle Authority (RDW) gave Scania and TLN the permission to test the trucks on a public motorway. RDW has other autonomous driving test applicants. The Netherlands Organization for Applied Scientific Research (TNO), Dutch truck manufacturer DAF, the Port of Rotterdam, the Province of Gelderland and the University of Wageningen all partnered together and tested self-propelled vehicles in the vicinity of Wageningen early this year, a Twente University release states. University of Technology Delft (TU Delft) deployed self-driving cars as well, to examine a bicycle path as a transport opportunity for rail passengers. Infrastructure Minister Melanie Schultz van Haegen has made repeated calls for international regulations to adapt to testing of autonomous vehicles. "I mean especially the Vienna Agreement that has existed since 1968 to facilitate international traffic. There are agreements on minimum requirements for vehicles, drivers and traffic," she said during the Scania test.