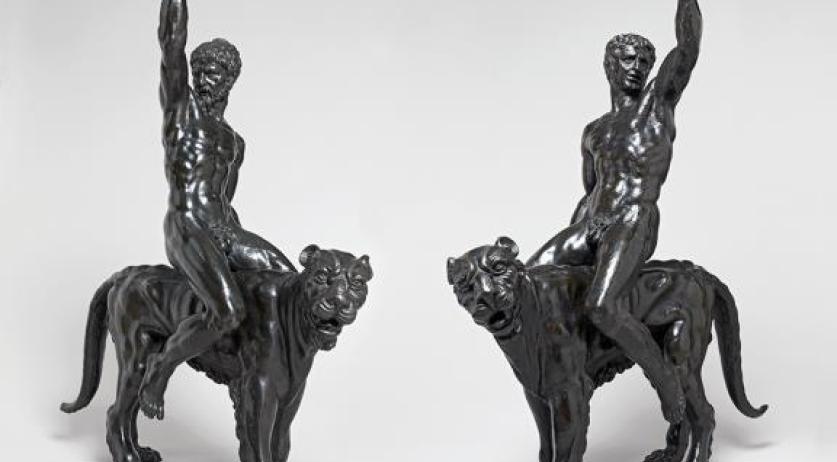 The Rijksmuseum has serious doubts about the Fitzwilliam Museum's (Cambridge) claim that two ancient bronze sculptures were made by Michelangelo. The sculptures are of two handsome, muscled, naked men seated on panthers with a an arm triumphantly in the air. The sculptures (of about 1 meter high) are owned by a private collector in England and can be seen in the Fitzwilliam Museum in Cambridge. The spectacular discovery that the sculptures were made by Michelangelo was made after years of research by a team of art historians. The museum calls the research "a Renaissance whodunnit". "Very exciting, and a privilege to have been part of it." If the claim is true, these are the only two remaining sculptures of the famous Renaissance artist. The research began after Paul Joannides, professor emeritus of art history at the University of Cambridge, established a link between the sculptures and a drawing by one of Michelangelo's pupils. In one corner of the paper he discovered a muscular young man on a panther in a similar pose. Research into the anatomy of the men led to the conclusion that the sculptures resembled other works by Michelangelo. The navels are allegedly exactly the same as that of his world famous David. According to the researchers, Michelangelo made these sculptures in the early 16th century, just after he completed the David and before he started his painting on the ceiling of the Sistine Chapel.

Michelangelo being the hand that made these sculptures is not a new theory. His name was connected with the works until the end of the 19th century. After that the works were attributed to, among others, Florentine Cellini and his assistant, the Dutch sculptor Willem Danielsz van Tetrode (1525 - 1588). Frits Scholten, senior curator of sculpture and the curator of a Van Tetrode exhibition in the Rijksmuseum in 2003, doubts this claim by his British colleagues. "They are reputable researchers, but their arguments do not convince me. The drawing to which they refer indeed shows a man on a panther, but not in this position. The other elements of the research - the similarities in anatomy, the fact that traces of hammer work are visible, like was often the case with marble statues by Michelangelo - do show a link with the work of Michelangelo, but from that you can't yet conclude that it was from his hand. The most you can say is that he creator knew Michelangelo's work well. He was in the 16th century a role model for many sculptors."