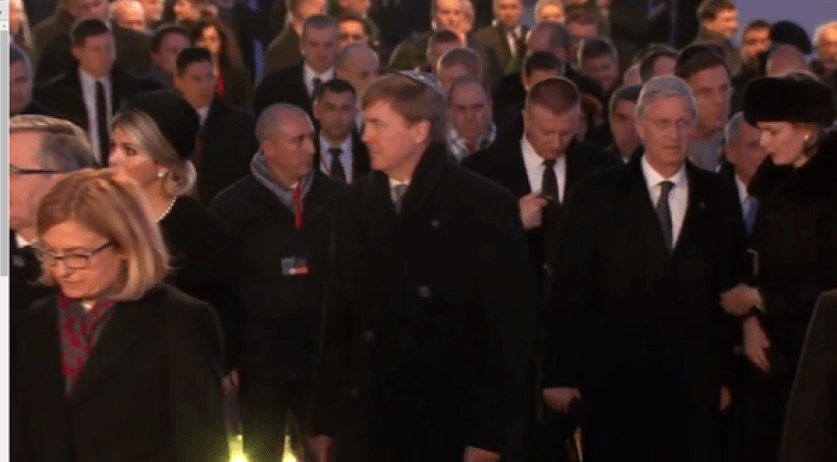 Dutch King Willem-Alexander, his wife, Queen Máxima and Prime Minister Mark Rutte are taking part in the annual Holocaust Remembrance Day at the Auschwitz-Birkenau concentration camp in Poland. Tuesday marks the seventieth anniversary of the liberation of the Auschwitz death camp, and dignitaries from around the world joined 300 Auschwitz survivors at the site. "Jews are targeted in Europe once again because they are Jews," World Jewish Congress president Ronald Lauder said at the event. "It looks more like 1933 than 2015. Once again, young Jewish boys are afraid to wear yarmulkes on the streets of Paris, Budapest, London and even Berlin," he said. "World silence led to Auschwitz. Do not let this happen again." King Willem-Alexander wore a yarmulke, a Jewish skullcap, during the ceremony. Polish President Bronislaw Komorowski thanked Russian soldiers responsible for liberating the camp seven decades ago, saying, ""With gratitude and respect, we think of them." He added the quote from Auschwitz survivor Primo Levi, who said, "Those who forget the past are condemned to repeat it." For the Dutch king, it was his second major Holocaust remembrance event in a week. He began the reading of the names of all 102,000 Jews deported from the Netherlands and murdered, a reading that took six days and five nights to complete. The names were read continuously for 24 hours, with the conclusion happening by the time the King arrived in Poland. The Dutch ceremony took place in Westerbork, where prisoners were rounded up before being removed from the country by train.

.@darrenrichman joins his grandfather, a Holocaust survivor, on his journey back to Auschwitz http://t.co/aYbA3oottE pic.twitter.com/g6nihN12qs