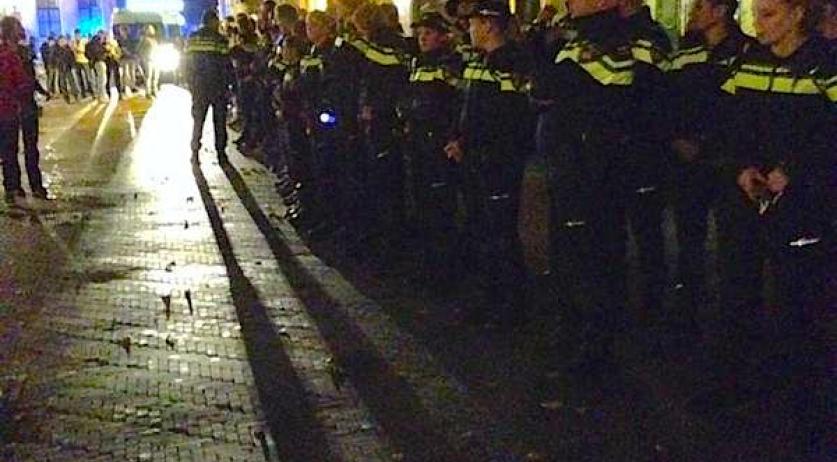 Protesters supporting Kurdish people in Syria stormed the Tweede Kamer, the Dutch Parliament’s House of Representatives, speaking out against the imminent fall of Kobani, a city in northern Syria under attack by the Islamic State (ISIS). Demonstrators are calling for the Netherlands to take stronger actions against ISIS, and they are will not leave until they have spoken to Members of Parliament. The Netherlands is refusing to take part in internationally-backed military action in Syria. Kobani rests at the Turkish border, 113 kilometers east of Gaziantep, Turkey, and 154 kilometers northeast of Aleppo, Syria. Police say they have not arrested any of the roughly 200 people speaking out. The protest, being called a sit-in by broadcaster NOS, has not moved beyond the security perimeter set up by law enforcement inside the political building. Police say at least 100 people made it inside the building around 9:40 p.m., with officers forming a line outside to prevent more from entering the facility. Socialist Party MP Sadet Karabulut spoke in support of Kobani, telling newspaper AD, “It’s a sign, they want to be heard by the House and the international community.” “ISIS has undertaken violent actions in Kobani,” one protester said. “Why are the Dutch F-16s not in use now?” “Kurds demonstrating, fighting and battling for years against ISIS terrorism. Kurds were ignored for years. International solidarity. Now,” she said on Twitter. Karabulut is of Turkish and Kurdish heritage. Just under 45,000 people live in Kobani, which has served as the capital of the autonomous Kurdistan region of Syria since earlier this year. Though the Netherlands has currently declined to join attacks in Syria, there are eight Dutch F-16s patrolling the skies over Iraq, with 250 members of the military supporting the flight crews. The fighter jets will be used to take out military installations and defend ground troop positions. Another 130 Dutch military men and women are advising and training Kurdish and Iraqi units. Hague Mayor Jozias van Aartsen is hopeful the situation will resolve calmly. A police spokesman said he wants “to see how we can solve this in a positive way.” In the meantime, Den Haag police have asked people to avoid the areas of Het Plein and around the Tweede Kamer.