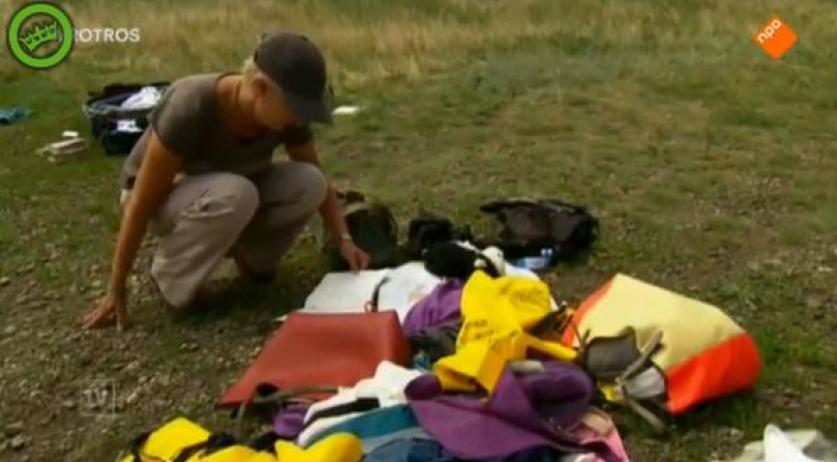 Dutch news channel EenVandaag has officially apologized for a report broadcast on Monday evening in which a reporter was seen rifling through several personal items of victims at the crash site of the Malaysia Airlines flight in Ukraine.  Journalist Caroline van den Heuvel looked through a travel journal belonging to one of the passengers, which some people on social media called "disrespectful", "scandalous" and "flippant." EenVandaag placed a statement on their website in which the editorial board apologizes for the journalist going "too far" in her desire to "describe the chaos as accurately as possible." "Caroline is an experienced reported who, in a war-zone, had to act in the heat of the moment. She did not want to hurt anyone." This is not the first news channel that has had to apologize for their employees' actions during a report on the ground at the MH17 crash site in Ukraine. Sky News in England has also apologized after one of its presenters performed a similar "breach of privacy" by rifling through a passenger's possessions. On Sunday afternoon, Sky News reporter Colin Brazier was on the ground in Ukraine, pulling items such as keys and a toothbrush out of an open bag. He then said: "We shouldn't really be doing this, I suppose." Social media was the stage for outraged criticism against Sky News about this incident. On Twitter, several journalists banded together to berate their cohort. BBC radio presenter Shelagh Fogarty said: "Sky!!! Get your reporter to STOP rummaging thru belongings at #mH17 crash site. 'We shouldn't really be doing this' NO S**T Sherlock!! Those items are essentially sacred things now for the relatives. Just appalling." After receiving "a handful" of complaints, a Sky News spokeswoman said that Brazier "reflected on the human tragedy of the event and showed audiences the content of one of the victims' bags. Colin immediately recognized this was inappropriate and said so on air. Both Colin and Sky News apologize profusely for any offense caused."