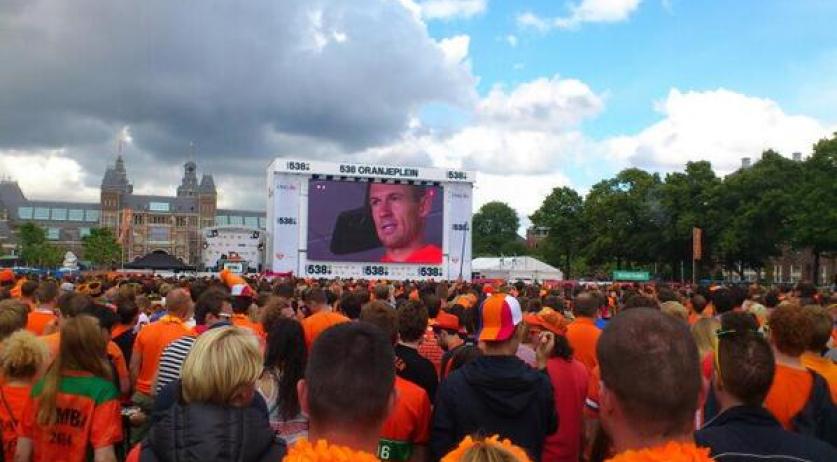 The match between The Netherlands and Mexico on Sunday evening was watched by almost 8.1 million Dutch people at home. On Twitter, 9.1 million tweets were sent out about the match. The Netherlands will meet Costa Rica on July 5th. According to viewership analysis from Kijkonderzoek, more people came in as the match went on. At the crucial final moments when Oranje managed to turn the 1-0 loss into the 2-1 win, 9.2 million people were watching. The post-match commentary drew 8.7 million people. It will only become clear how many Dutch people took to the pubs and other gathering places to watch the match. According to AT5, however, the Museumplein in Amsterdam was given the temporary moniker 'Oranjeplein' after 45,000 people filled up the square to watch the match on a big screen. At a certain point, there were so many people that organizor 538 was forced to block people from entering the square. At the 2-1 win, the crowd went wild.

The win qualified Oranje for the quarter finals of the World Cup, in which they will have to battle Costa Rica, who won the match against Greece after penalties. The Netherlands Mexico match was not without controversy. An opinion that was evident on Twitter as well. During the final minutes, Robben took a fall over the outstretched leg of Márquez, which some say was a bit over-dramatic. Klaas-Jan Huntelaar, who passed the ball to Sneijder to equalize in the 88th minute, took the penalty kick to earn The Netherlands their 2-1 victory. The feeling that Mexico was robbed was the focal point of the Twitter commentary on the match.  The top tweet retweeted, by now, almost 29,000 times, came from actor Aaron Paul from Breaking Bad. In the tweet, Paul laments that Mexico did nothing wrong, and applauds Robben for his acting skills. https://twitter.com/aaronpaul_8/status/483313917595500545