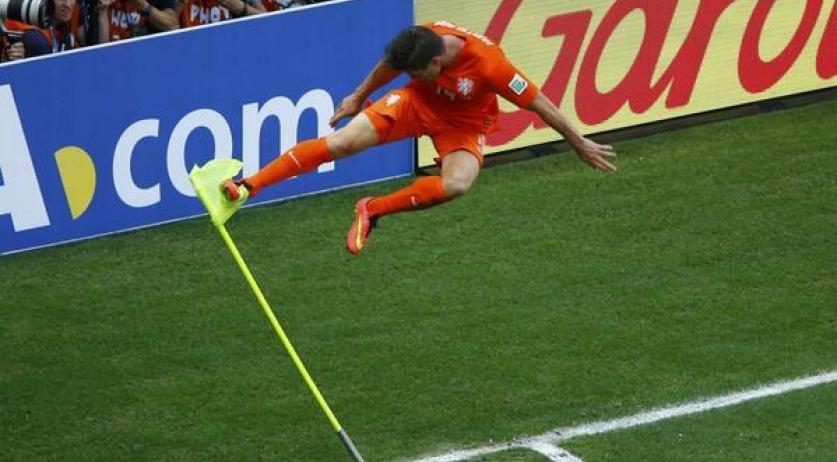 Facing imminent elimination with only minutes left in the World Cup match against Mexico, the Netherlands found a way to put the ball in the back of the net twice to win 2-0. The thrilling game saw Oranje knock Mexico out of the tournament, and move on to face the winner of the Greece-Costa Rica match later Sunday evening. The teams were all level by halftime following a first half that seemed largely dominated by the Mexican team. Shortly after the restart, Mexico went on the board in the 48th minute with a goal by Giovani Dos Santos fired from just outside of the penalty area. Oranje was few on chances following that point, securing several corner kicks that went wanting. At least two hard shot balls were stopped by an impressive performance from Mexican goalkeeper Guillermo Ochoa. Mexico held the lead for forty minutes, until a corner kick booted towards the far post connected with the head of Klaas-Jan Huntelaar's head, landing at the feet of Wesley Sneijder at the edge of the area who fired a bullet past Ochoa's right side. Four minutes later, into stoppage time, Arjen Robben on a run towards the goal line was tripped up by Mexico's Rafael Marquez, drawing a yellow card and awarding a penalty to the Dutch. The shot was taken by Klaas-Jan Huntelaar, and buried into the back of the net. The Dutch held on during the rest of the added time, leading to a late victory over a valiant Mexican team that played strong throughout the tournament only to come up short in the last minutes of the match.