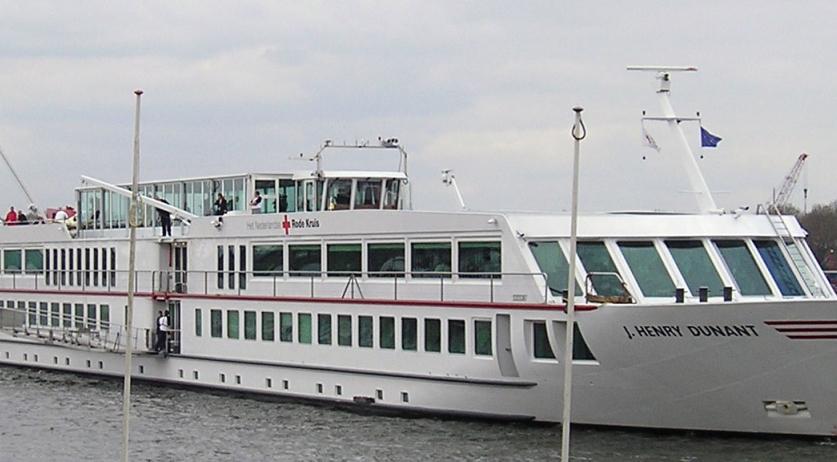 The Henry Dunant, the flagship of the Dutch Red Cross, fell victim to robbers over the Easter weekend. The band of thieves ravaged the cruise ship, which was moored at Utrecht, and made off with a booty of valuable items including laptops, cameras and a safe.  The ship was moored in the Amsterdam-Rijnkanaal near the Kanaleneiland neighborhood in Utrecht. The robbers boarded the vessel on Saturday night. "The machinist overnighted on board but heard nothing", a spokesperson of the Red Cross told the Algemeen Dagblad. According to the spokesperson, the robbers were able to board the ship by forcing a door open. They stole laptops, cameras, cash registers, a small amount of money and a safe. The contents of the safe are not known. Televisions were also torn from the walls, but not taken. "Possibly because the screens were damaged", the spokesperson said. The inventory is still being done, so there is no indication yet as to the exact proportions of the damages. It is also unclear whether or not the Henry Dunant has an alarm system. Employees from The Ministry of Infrastructure and Environment (Rijkswaterstaat) were sailing past the ship on Sunday morning when they spotted that the entry door to the ship had been forced open, and called the authorities, the spokesperson says. The Henry Dunant was moored in Utrecht as it was in transit. The holiday ship is equipped for cruise trips for the chronically ill and disabled. It has now sailed on as it is on a schedule. "Most of the damage has since been repaired and the rest is being worked on. The planned vacations can luckily keep going", says the Red Cross spokesperson.